Around this time of year, Cape Region golfers usually enjoy the January thaw. It’s a break from the usual high 30s to mid-40s, with temperatures frequently rising to the low 50s and sometimes higher. 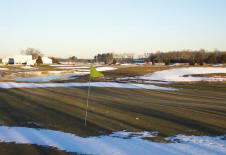 Snow covers part of the frozen turf on the 13th green at The Rookery Golf Course.

Right now those golfers are wondering where the thaw went. Most ponds are frozen over, and even some of the slower tidal creeks are full of ice. Nighttime lows are in the single digits, and the highs are in the 20s at best.

Cape Region golf superintendents explained the risks associated with this cold weather that the area’s golf courses usually don’t face. Even so, as a group they were not too troubled by the harsh conditions, as long as they don’t last much longer.

Chris Adkins, part-owner and course superintendent at The Rookery, had a bottom-line attitude about the cold: “The biggest problem is that it stops the cash register,” he laughed.

“Generally, a week or two of freezing cold is not a big problem. The real risks start when it hangs around for a while. Then you have a bigger chance of seeing moisture-related diseases, such as snow mold fungus,” Adkins explained. 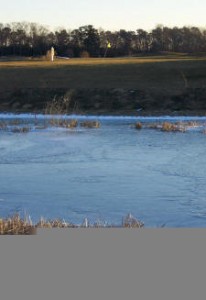 The pond surrounding the island 15th green at The Rookery is completely frozen over.

“It can be a real problem if the snow comes when the ground is not frozen already. The snow acts like insulation, and can help promote the fungus growth while the snow covers the wet turf. It shows up more in the old style push-up greens than the sand-based greens. Our ground was frozen solid before last week’s snowfall, so we’re not facing that risk.”

Adkins added, “The next big problem is if ice forms on the turf, and it stays around for a month or more. The ice can cut off the plants’ oxygen supply.”

He also said there were a few benefits to the cold snap: “It does give the golf course a chance to rest, and you usually don’t have to worry about the ice because it usually thaws out before there’s any long-lasting damage. It also makes a difference depending on what type of ice you see. If it’s solid and clear like glass, that’s a problem. If it’s porous and cloudy, then there are air pockets in it that will help keep it from suffocating the grass.”

Brown added, “The main thing is to stay off the grass when it’s frozen. The pressure of someone’s foot will burst the frozen cell walls of the grass, and cause a tell-tale purple blotch.”

Scot Anderson at Sussex Pines hoped the freezing weather would kill off some of the nematodes and other pests that can’t take cold temperatures for very long. On the other hand, the cold is holding him back from some of his projects. “I’m in the middle of a drainage project, and can’t do anything about it right now because the ground is frozen solid 10 inches thick. That’s a pretty deep freeze around here.”

As for the risk of snow mold fungus, Anderson said he and his crew applied a fungicide preventative last October, and that he’s not too concerned about it. Even so, he plans to be cautious about re-opening the course for play when the weather breaks: “I’ll probably keep the back nine closed for a while to give it a chance to drain off a little better.”

Steve Zeveney, the superintendent at Shawnee Country Club, would like to see the weather warm up soon: “It’s really slowed down our construction work, and we’re hoping to get back to it next week if it thaws out.”

He also stressed the risk of extended ice cover on the turf: “It’s like putting a sheet of plastic on the grass. It’ll kill off some of the pests, but you really don’t want that ice to be there for very long.”

Cape Region golfers would agree with that.