The owners of the Heritage Inn and Golf Club are seeking county land use approvals for a significant change on about 17 acres of their nine-hole golf course. 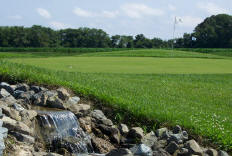 The sixth hole at Heritage Inn and Golf Club

If the rezoning is approved as detailed in the application, there will be 128 townhouses and 18 duplexes built on the southernmost portion of the layout, which opened in the spring of 2000 just off Postal Lane in the Midway area.

The golf business is in a downturn nationally, and it’s had an effect on Cape Region public operations. Another area golf course has already fully converted to housing, for example. What’s unique about the Heritage proposal is that the owners plan to keep their golf course.

The rezoning application for conversion to a medium-density residential planned community has now been deferred by the Sussex County Planning and Zoning Commission. According to a News-Journal story published on July 15, there is some local opposition to the housing portion of the proposal. Derrickson stressed that the proposed changes to the golf course are tentative, and won’t take place without the rezoning.

Considering the acreage involved, however, the planned changes to the course may not seem that drastic. Derrickson said that no alterations are needed for hole numbers 1 (par 3), 2 (par 4), 3 (par 4), 6 (par 3), and 9 (par 4). The biggest alteration would require a fairly complete reworking of the 4th hole, now a 320-yard par four that runs parallel to the rear of the Rehoboth Outlets stores to the east.

“We’ll have to build a new tee box between the No. 3 green and the No. 5 fairway, and a new greens complex,” Derrickson said. “We’d like to see if we can keep this a par 4 hole; maybe we can make it a drivable hole for the long hitters.”

The fifth hole would remain a par 5 hole, but would be shortened by 100 yards to about 458 yards from the back tees. “That will make the hole reachable in two for some. They’ll still have to hit a long second shot to clear the water in front of the green,” Derrickson explained.

The sane shot would be to lay up to about 100 yards out for a full-wedge into the center of the green; but then, not all golfers are sane.

The seventh hole would be shortened considerably, from its current 303-yard length to about 130 yards at most, according to Derrickson. “We can pretty much leave the back tee box alone, but we’ll have to rebuild the green completely. In addition, the stormwater management facility for the housing portion of the project can be placed between the tee box and the green, making this par 3’s tee shot completely over water.”

The 8th hole can retain the same greens complex it now uses, but the tee box needs to be moved. Derrickson said the eventual yardage will be similar to the 7th tee, which is not something they really like. In any event, the green designs will be different, and the shot direction is the opposite of the 7th hole.

From a golf perspective, the proposed changes will not convert Heritage into a collection of short par 3 holes. Instead, the Derricksons seem to have figured out how to maintain one of their goals for the course design. Bryan Derrickson said, “We wanted to make sure that golfers would use all the clubs in their bag when they play here. We think they will still have that chance, if this rezoning is approved.”