Some Cape Region golfers have no need to feel jealous while watching the PGA Tour begin its 2004 season in beautiful, sunny, and warm places. 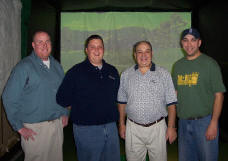 Mike “Tweets” Weddle said, “It’s just like playing for real, except there’s no putting. It helps keep up the rhythm and tempo of your swing, and helps you stay loose.”

Chris Banning, the publisher of Shore Living Magazine, is Weddle’s partner in the two-player sets, who compete in 9-hole better ball matches on Wednesday and Thursday nights. “This is a lot of fun. Everybody has a good time.”

On a cold winter Wednesday recently, I watched Pete McCaffrey and Brian Boyle square off against Joe Romano and Jason Diamond. The competition was close, with the Romano/Diamond pair winning 2-1.

Boyle clearly enjoyed all the kidding around, even when he was the target. “The camaraderie’s good. It gives us a way to enjoy golf in the winter, too.”

Diamond is the first assistant golf pro at The Beach Club course, near Berlin, Maryland. His drives usually took off at about 115 mph, and landed somewhere close to 300 yards out. From the sharp cracking sound his ball made at contact, the simulator wasn’t kidding.

Diamond also uses the computerized system for his business. “I give a lot of golf lessons with it. The simulator gives great feedback to the students, especially when it’s set up as a driving range.”

Romano, a retired bar owner from Pittsburgh who works as a starter at The Rookery, tended to hit his drives a bit more like the rest of us humans, at about 86 mph. Even so, on one hole his 182-yard carry rolled downhill another 90 yards, leading to much laughter among the rest of the gang watching the action. Romano didn’t mind a bit: “We won our round last week, and this is fun. We play as much as we can outside, but right now it’s just too cold.”

McCaffrey is the golf coach at Delaware Technical & Community College’s Owens Campus, and a student at Wilmington College when he’s not working at Clubhouse. His drives usually landed out there with Diamond and Boyle, and his approach shots from long range often made it to the green.

On the other hand, sometimes this didn’t help, since the simulator does the putting. Even McCaffrey admitted that a three-putt from 48 feet out wasn’t outside the realm of possibility.

On some holes the winning stroke would come from a one-putt from 12 feet, while an attempt from 6 feet would take two strokes. Whenever this happened the hooting would start, but the players also agreed that the same thing could easily happen out on a regular golf course.

Earlier that week I played an 18-hole round on the simulator with John Eustis, who beat me like a rented mule. This is pretty much what happens whenever we play together at Shawnee Country Club, so we agreed this simulator is obviously realistic.

On the other hand, the computer’s assumptions about putting seem to be affected by how easily one reaches the green. The better you play on the way to the hole, the better the computer will assume you can putt. That’s not always true.

Players hit off of a special tee that has sensors in front and behind it. The sensors detect club speed and approach angle as the ball is hit. Once the real ball slams into the large screen in front depicting the action, the virtual ball appears at the impact point and shows what would happen with a real shot.

I can vouch for the fact that this can include rattling around among the trees, and plopping into sand.

Trap shots are also played as if in a real bunker. As Eustis pointed out, however, unlike real golf I always escaped a simulated trap in one shot.