With their new cruise/golf business here in the Cape Region, Phil and Joan Voshell are adhering to the same business principle so brilliantly marketed by the folks who own the Life Is Good® Company—Do What You Like, Like What You Do. 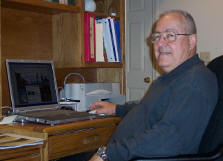 As the economy improves, the couple expects their fledgling travel operation, Voshell Golf Cruises, to grow along with it. The early signs point toward the achievement of that goal.

In a recent interview, Phil explained how they started in the travel business. “Joan and I have been on several cruises ourselves, and I’d play golf when I could. Joan also started playing golf, and so we looked around for places to play together. I read an article about Caribbean Cruise Lines and their franchise opportunities, and checked it out.”

“It took a couple months to complete the due diligence, and then we bought into it.”

The Voshells’ sales territory includes the Delmarva Peninsula and the Tidewater Region of Virginia, but their opening efforts have remained fairly close to home. “The company does much of the advertising and runs the website. I set the groups up and they do the booking and billing. I also do some of the booking for the small groups of 2 to 6 people. Most of what I do is the same as any other travel agent. It’s just focused on golf and cruises,” Voshell said.

The trips can begin from any cruise line port, such as Philadelphia, Tampa, Fort Lauderdale, Miami, New Orleans, or even Los Angeles. “We have some cruises that leave from LA and go down the western Mexican coast. These cruises aren’t limited to the Caribbean,” Voshell said.

They’re not limited to this continent, either. A planned July 2004 cruise will take vacationers to seven or more golf courses in Ireland, including such famous layouts as Ballybunion and Donegal.

Normally the airfare is included, but that’s an option for those who decide to reach the cruise port on their own schedule. In addition, Voshell can arrange for more golf opportunities at resort courses such as Doral in Miami, either before or after the cruise itself. “Several of these resorts work with the cruise lines in the same ports,” Voshell said.

Like other cruises, the trips Voshell sets up use the ships as the primary base of activity. “The ship is your hotel, your bar, your casino, your restaurant, everything,” Voshell said. “The extra steps deal with making sure you can get your 18 holes in. Many of the ships now have golf simulators on board, and several book golf pros to give lessons on the ship or play with you on the course.”

To make sure there’s enough time, Voshell focuses on cruises that provide a minimum 7 hour stay at the ports of call where the golf is scheduled. The itinerary includes the travel from the ship to the course, scheduled tee times, and the return trip to the ship before departure. “When I can I try to make sure there’s 8 hours for the golf, but I really don’t like to go any shorter than 7. Nobody likes to be told they have to stop playing after only 12 holes,” Voshell grinned.

The Caribbean destinations cover a wide range. Voshell said he’s recently played the White Witch Course in Montego Bay, Jamaica, as well as the Links of Safe Haven in the Grand Caymans. Other courses are available for cruisers in such winter-friendly places as St. Thomas, the Dominican Republic, Aruba, Barbados, and Antigua.

Although his original business plan was limited to golf and cruises, Voshell is already seeing his work expand beyond those original boundaries. “My focus began with golf, but you need to be flexible to grow with the opportunities. If I set up a customer with a golf cruise, and he later comes to me for another kind of cruise, I’ll certainly do what I can.”

That kind of attitude should certainly help the Voshells in their new venture.