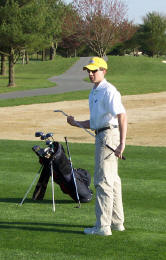 The Vikings hosted Indian River at Rehoboth Beach Country Club on April 1, and won the match 175-209.

Both teams struggled, thanks to the rain storm that affected play on several holes.

Brett Hertel took medalist honors with a 41. “It rained for about an hour. For our group it started on the second hole, and pretty much faded out by the 6th hole,” Hertel said. “I doubled the 8th hole. I plugged the ball in the left front bunker, put it on the green, and then three-putted. I also topped 2 shots in a row—good stuff!”

John Purple wasn’t too upset with his 43. “I wasn’t hitting it too bad, I just had 3 doubles.”

The wet conditions certainly had an effect. Purple’s approach shot on the par-5 9th hole flew the green and plugged on the downslope of the back side of the rear bunker. In dry weather, with Rehoboth’s typically hard-packed sand, that shot would have probably rolled back to the middle. As it was, Purple was forced into an awkward stance. His first attempt stayed in the bunker. He then blasted out and made one of his doubles. He also parred the first, third, and fifth holes.

Jason Hastings scored next with his 44. “It was pretty good. My woods were wayward today. It was cold while it rained.” Hastings impressed his teammates with his shot to the green from 140 yards out on the 9th hole, with the flag set in the right rear of the green. The ball landed a few feet short of the hole and stopped 10 feet past it.

Kurt Stephens made his first scoring contribution of the season with his 47, and was happy with his pars. “On the fifth hole, I used a 9-iron to 15 feet, and two-putted. On number 2, I drove in the fairway, hit a 7-iron to 20 feet, and had another two-putt.”

The team then traveled to Shawnee Country Club on April 6, and beat Lake Forest 171-186.

Purple led all players with a fine 2-over-par 38. “I really got away with some stuff today,” he grinned. For example, Purple said his tee shot on the par-4 sixth hole went left. A stand of pine trees blocked his view of the green. His next shot flew directly over the trees, and his ball landed on the green for an easy par.

Purple also birdied the par-5 8th hole. “It was downwind. I hit a super second shot with my 3-wood [from 230 yards out], and it hopped on after one bounce in front of the green. I two-putted it from there.”

Hertel wasn’t pleased with his 42, but the Cape senior has fairly high standards. “Everything from 100 yards in was horrible–putting, chipping, sand, pitching.” On the other hand, Hertel also admitted to parring the second, fourth, and eighth holes, so it must not have been all bad.

Hastings completed the team scoring with his 46. He said the seventh hole I observed him play was typical of his round. From just under 100 yards out, Hastings hit a nice iron shot onto the green, about 18 feet left and above the hole. His first putt rolled past a few feet, and the next one also slid by. He made the short third putt for a bogey.

The team was to travel to Seaford Country Club on April 8 for a match against Laurel. Their next match is scheduled against Milford on April 20, after spring break.