The Cape Henlopen High School golf team made a statement to the rest of its Henlopen Conference rivals, with a 163-165 win on April 20 over previously undefeated Milford High at Shawnee Country Club, the Buccaneers’ home course. 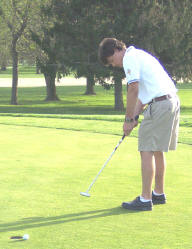 It was a total team effort, not least of which because Andy Geyer, Milford’s No. 1 player, shot past all the other golfers with a fine 4-under-par 32 on the front nine.

Geyer is among the state’s best junior golfers, and this was his best score of the season.

John Purple led all Cape players with a 39. “Today was a weird day. I missed too many greens to play well. I only had two greens [in regulation] all day,” Purple said. “I was scrambling the whole time.”

Purple started off well, with a birdie chip-in on the first hole. After pars on the next three holes, he double-bogeyed the par-four fifth hole. He parred the sixth, but his drive on the par-4 seventh hole went into the trees to the right of the fairway. That mistake led to another double.

After his second shot landed in the left greenside bunker on the par-5 eighth hole, he blasted out and two-putted for another par. Purple finished his round with another par on the ninth hole.

Brett Hertel’s 40 was next best, and he said he was all over the place during his round. “I was consistently inconsistent,” the senior admitted. The highlight of Hertel’s performance was a “punched gap wedge” approach shot on the seventh hole to one foot, for an easy birdie. He also made a scrambling par on the third hole, after his drive went left and dove to the ground after hitting a tree only 120 yards out. Hertel then hit a full three-wood, and his pitch shot thereafter was close enough to one-putt.

Unfortunately, Hertel’s good scores were offset by a double on the second hole and a few bogeys.

Andy Lee scored a respectable 42 against Milford. He parred the first, third, fifth, and ninth holes, and bogeyed the second, fourth, sixth, and eighth. Lee’s drive on the tight seventh hole went left and was lost, leading to a scrambling double-bogey. “It wasn’t too bad today. The one bad hole kind of threw me off,” Lee said.

When Lee finished, the two teams were only a single stroke apart, with Brian Davidson and Kurt Stephens playing on the eighth hole. The rest of the Viking squad went over to the pair and told them how the teams stood.

Davidson rose to the challenge. As he described it later, “I knew I had to make it up on the eighth.” He drove the green with his second shot from 220 yards out, and two-putted for a birdie.

At that point Cape went ahead. All Davidson had to do was make a bogey 4 on the ninth hole, and the Vikings would win by a stroke.

Davidson then smacked an 8-iron 150 yards, where it left a pitch mark 2 feet right of the pin and stopped 5 feet from the hole. As he walked up to the green, Davidson gave a sheepish grin to his obviously happy teammates.

He tried for a birdie, but the putt slid by on the left side. Davidson then tapped in the one-footer for a 42 and the two-stroke team victory.

Before those last two holes, it was anyone’s guess how Davidson would finish. He started with a one-putt par on the first hole, followed by a double-bogey on the par-5 second. A drive into the trees on the third hole led to a bogey. His approach shot on the par-3 fourth hole was pin-high left, but he made “not such a good chip” for another bogey.

Davidson then bogeyed the next three holes before his teammates helped him finish with a flourish.

The team is scheduled to host Seaford on April 22, followed by an away match against Smyrna on April 27.