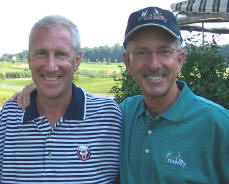 2004 Senior British Open champion Pete Oakley (left), with his friend and occasional caddie, Kal Katz (right), at the reception held in Pete’s honor at his golf course, The Rookery.

On August 9 an excited crowd of well-wishers joined 2004 Senior British Open Champion Pete Oakley at The Rookery in Milton for a reception honoring his stunning major victory.

Oakley was equally energized by the celebratory mood. He and co-owner Chris Adkins, along with several members of the original investment group that helped create The Rookery, chatted and laughed with a wide assortment of family and friends.

As many of them proudly noted, Oakley’s victory is a remarkable and rare achievement for the Delaware golf community.

Oakley himself is still a bit surprised at the way other, far more famous golfers reacted to his triumph.

“I’m in the locker room at Bellerive [during the U.S. Senior Open], and Arnold Palmer comes right up to me. He says “Congratulations! I’m so happy for you!” In telling the story, Oakley then pantomimed a near-faint, which was perfectly understandable.

After the U.S. Senior Open, Oakley traveled to Minnesota for the 3M Championship, a popular stop on the Champions Tour. He finished with a 4-over total for the three-day event, and said the green speeds were tremendous.

“I thought Bellerive’s greens were fast, but the ones at 3M had to be running at 13 or more.”

Other close friends also came to the reception. Oakley introduced me to Kal Katz, the president of Mad Golf Apparel/Frenzi Golf. Katz is also proud of his role as an occasional caddie for Oakley, most recently at the U.S. Senior Open.

Oakley said Katz follows the three basic caddie commandments—show up, keep up, and shut up. Katz nodded in agreement, and matched Oakley’s grin with his own.

Oakley plans to take advantage of the playing opportunities the Senior Open win gave him. “I can play the Champions Tour for a year, up to the date of the next Senior British Open. If I finish in the top 30 before the end of this year, I’ll qualify for the next whole season. I’m also qualified to play on the European Senior Tour for the next five years.”

With those incentives, we might not see much of Oakley around the Cape Region for a while. On the other hand, it will be easy to follow along as he enjoys his new success.

The folks at The Perfect Club recently sent me one of their new hybrid models, The Perfect Accuracy, to try out and report to you.

The fairway wood head has a 24 degree loft, what one would expect on a classic 6-wood. Nonetheless, the shaft is only 38 ½ inches long, matching a normal 5-iron. The club face also has a slight offset. The company says this combination will replace 5- or 6-irons or 9- or 11-woods.

I first tried the Perfect Accuracy club at the Shawnee CC practice range. With the very first shot I had a Keanu Reeves moment—whoa! It carried a high, dead straight 165-170 yards, with a tiny little draw.

With the very next shot, however, the ball shot off to the right at about 30 degrees. That was a quick reminder that while the club may be perfect, most golfers aren’t.

I soon learned how to take advantage of the club’s design, and I plan to keep using it, thank you very much. With an easy swing and a set-up in the middle of your stance, the club works great in the fairways and especially in the rough. Approach shots to the green also hold nicely, as several of my playing partners over the last few weekends can attest.

A neutral grip helps keep the ball straight, while a slightly strong grip will promote a right-to-left ball flight. I haven’t tried to hit an intentional fade with it yet, but I think the offset head won’t make it as easy to hit as a draw.

Perfect Clubs are now available at Clubhouse Golf on Rehoboth Avenue Extended. More information about the clubs can be found at www.theperfectclub.com.