A good movie about golf–finally

Movies about golf have a spotty history.

The last one I made any effort to see was Tin Cup, starring Kevin Costner and Rene Russo, and that was several years ago. I made no serious attempt to watch any golf movie since that time, based on the mostly negative reviews they received.

This week the folks at Disney took their turn at the genre, and did surprisingly well. 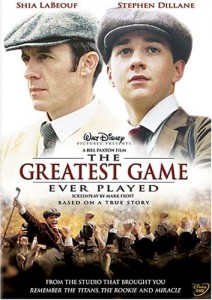 The Greatest Game Ever Played

The Greatest Game Ever Played is receiving very good reviews from critics such as Roger Ebert, and it deserves them.

The movie is based upon the best-selling book by Mark Frost, who wrote the screenplay and co-produced this sensitive, stirring story of Harry Vardon, Francis Ouimet, and the beginnings of modern golf.

For those who don’t remember the book review I ran in this column a while ago, this is a great sports story about how a young former caddie manages his game to a highly unlikely but ultimately extremely popular victory in the 1913 U.S. Open. Francis Ouimet (played by Shia LaBeouf) and his plucky little caddie, Eddie Lowery, overcome all sorts of on- and off-course obstacles along the way to winning one of the most significant Opens in its first century of competition.

As with the book, the movie also gives a glimpse of the social history of America and Great Britain from the late nineteenth century up to World War I.

By 1913 Vardon (played by Stephen Dillane) was a significant force in golf, with several British Open titles and one U.S. Open title on his record. Along with his friend and compatriot Ted Ray (played by Stephen Marcus), the two Englishmen came to America. At the time it seemed that the only real debate about the event was which of them would win.

The movie treats both British competitors sympathetically. Based on the book and other sources, these portraits were fairly realistic. While there are plenty of reasons to root for Ouimet, there was a true element of sportsmanship shown by both Ray and Vardon.

There are several scene-stealing moments by Josh Flitter, who plays the diminutive Eddie Lowery, the 11-year-old last minute substitute caddie for Ouimet. I don’t know where they found this kid, but he should have a great future in movies.

As shown in several pivotal scenes, Ouimet must contend with the deep disapproval of his father for even playing golf. His home’s proximity to The Country Club across the street was critical to Ouimet’s development as a golfer, but it certainly didn’t smooth his fractious relationship with his father.

In the first few decades of the 20th Century, professional sports were only just becoming a part of the entertainment business in which people could make a very good living. The normal workweek was finally beginning to shorten for millions of people, leading to increasing options for leisure, including spectator sports.

Advances in literacy also created millions of readers for the journalism industry, leading to expanded coverage of sporting events.

Bernard Darwin joined the American contingent to report on the Open for the London newspapers, and his character is integral to the movie’s plotline. In addition, a prickly British newspaper magnate sponsored Vardon and Ray’s presence at the Open, and accompanied them on their adventure.

The movie shows that a certain current owner of the New York Yankees was not the first such powerful figure to create deeply mixed feelings among the players who accepted his money.

During the past summer there were several reports of a serious slump in the movie business, with ticket sales down quite a bit. If enough golf fans go to see The Greatest Game Ever Played, perhaps the movie makers will take the hint.

If you make a good movie, people will come.