For example, relatively few book lovers purchase short story or essay collections. The remainder bins at the local bookstores in the Cape Region often include recent editions of the collected thoughts of various familiar op-ed columnists.

It’s also a common sight to see books of short stories, some of very recent vintage, waiting to be noticed in the back aisles of the larger, blockbuster-oriented bookstores.

Fortunately, the publishers keep trying. Those of us who enjoy reading the shorter stuff are the better for it. 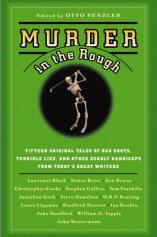 Murder in the Rough: Original Tales of Bad Shots, Terrible Lies, and Other Deadly Handicaps from Today’s Great Writers

Murder in the Rough (Mysterious Press; $24.95 SRP) is a new addition to the golf mystery genre, and the collection is highly entertaining. The editor, Otto Penzler, gathered together some of the leading lights in modern-day crime writing. Depending on one’s taste for skullduggery on the links, there are plenty of gems among the fifteen stories in the collection.

All of the pieces are new, and there are a variety of voices in each of them.

The narrator in Ian Rankin’s “Graduation Day” reminded me a bit of Henry Hill, Ray Liotta’s character in the movie “Goodfellas”—that is, if Hill had found himself standing in a fairway at St. Andrews, waiting for his boss to win a bet. On the other hand, the ambitious young woman who doesn’t let anything or anyone impede her goal of making it on the professional tour in John Sandford’s “Lucy Had a List” was more reminiscent of Reese Witherspoon’s character in the movie “Election”—albeit far more deadly.

A few stories are almost old-fashioned, a bit like Dick Francis’s horse-racing series, and that’s fine with me. I especially enjoyed H.R.F. Keating’s “Miss Unwin Plays by the Rules.” A young governess in late Victorian England must find a way to preserve her position after discovering some decidedly unpleasant truths about her employer.

Another British story, Jonathan Gash’s “Death by Golf,” looks at the seamier side of antique dealers and other cast-offs on the edge of the sport.

Other pieces are more atmospheric, such as Bradford Morrow’s “The Hoarder” and Tom Franklin’s “Those Good Days.” Their connection to normal golf is tenuous at best, but a strong current of dread runs through both stories.

I can’t say that I liked every short story in the collection, but that’s to be expected. I’m equally sure that other readers would have a different list of favorites and others that were not so much enjoyed.

One of the best features of these books is the opportunity to sample the work of several authors all at once. As the writers themselves surely realized, Penzler gave them the chance to reach a potentially wider audience for their other work.

And for fans of golf and mysteries, this collection provides a thoroughly agreeable incentive.

The Delaware Senior Olympics is a remarkably popular competitive series, with a wide variety of athletic events held in late summer and early fall.

The golf championship was held on September 11 at Jonathan’s Landing Golf Course in Magnolia, and Eleanor Soltner of Lewes readily suggested that “September 11 was a terrible day to hold the tournament.” Nonetheless, the seniors played on, and several Cape Region golfers earned medals. All five are also members of Shawnee Country Club, too.

Soltner explained that the Olympians compete in age brackets, set in five-year increments. The golf tournament was a straightforward gross score event for 18 holes. As with the regular Olympics, medals were awarded for the first three places. For example, her husband Frank earned a third place bronze in his age group, with a 90.

Bob Burd took first place in his age bracket, and Mike Cavanaugh earned a silver medal. Charlie J. Anthony also won the silver medal in his age group with his 80.

And Soltner herself took first place in her bracket. When I asked her for the score, she laughed and said “113. I’m usually a nine-holer, and that is not my favorite course.”

Apparently she didn’t let her feelings about the golf course affect her competitive spirits.