The awkward challenges of junior golf

Ninth grade is not a part of my life I would like to live all over again. 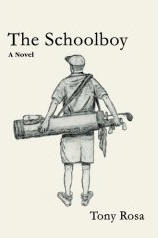 Of course, Tony Rosa didn’t know that when he asked me to review his new book, The Schoolboy ($9.95 SRP).

Nonetheless, as I read this short novel about a fourteen-year-old boy and his reluctant participation in a junior golf tournament at a scruffy public course, I re-experienced several aspects of the emotional turbulence that I don’t fondly recall, from when I was that same age a long time ago.

That is to Rosa’s credit, and should be taken as a recommendation. Anyone who can re-create the young teen’s awkward sense of semi-competence, self-doubt, and urgent need to know where they fit in among their peers is to be congratulated.

The fact that the action is centered around golf, a sport I didn’t take up until I was 30 or so, takes nothing away from the universality of the experience Rosa describes.

Sam Parma lives with his widowed mother, an older sister, and his younger brother in decidedly modest circumstances. His family has lived in the area for a while, long enough for one of his relations to have won the local Schoolboy Tournament several years ago. Sam’s grandfather and mother have apparently decided that Sam should carry on the family tradition of participating in the event, even though Sam’s primary sports interests lie elsewhere.

To make matters more interesting, and to this reader more factually convincing, Sam has to bring his younger brother along, and keep an eye out for him while he plays. Considering that the tournament players are to be separated by age groups, that won’t be easy.

Sam’s more immediate difficulty occurs as soon as he meets his three playing partners, all of whom will be familiar to the boys reading this book, as well as their fathers.

One boy is not averse to cheating, swearing, and otherwise trying to fit a deeply flawed model of what it means to be far older than he really is.

Another player is frankly threatening, towering over the younger Sam and as ready to abuse those playing with him as the course itself.

The third golfer is from the country club set, out of Sam’s social league at that point, but at least he doesn’t seem to act like Sam’s superior in every respect.

Sam is smaller and younger than any of them, and not nearly as experienced or skilled in playing golf as most of his competition. It’s by no means a sure thing that he’ll be able to live up to his family’s expectations, at least as he understands them at the time.

Rosa’s description of the tournament action among the four players shows either how autobiographical this book really is, or that Rosa has had years of experience watching junior tournaments.

For any adult golfer who’s had that pleasure, these scenes will be familiar.

Excess displays of emotion for both good and bad swings are common. Fractured attempts to swear will be made, but we’ll know that practice will eventually make perfect. The boys will frequently distract themselves with their conversations and what they see when they traipse into the woods for a lost ball. Even more impressive is the undeserved but persistent belief in their ability to make the perfect recovery shot under any conditions, and their mystified response when it doesn’t work.

It’s a slim story, but one worth telling. For the young golfers reading it, they’ll be reassured to learn that they’re not so different from their peers. For older readers, they may experience a sometimes-wincing remembrance of their own past, tinged with fondness.