This past week showed some familiar signs of spring golf in the Cape Region.

Not all of them were welcome, depending on who was reacting to what.

For example, Shawnee Country Club’s golf pro, Devon Peterson, didn’t mind telling me what he would do if he were king. “I’d abolish Daylight Savings Time, or at least stop pushing the start date up so early,” he said sternly—and then he laughed.

“All the local pros will agree with me. Daylight Savings Time adds two hours to our work days, easy,” he explained—and then he laughed again, to make sure I didn’t take him too seriously.

Even so, on behalf of those golfers who work for a living in an office environment, I respectfully beg to differ with my golf pro.

One of the most depressing things about the winter around here is that it goes dark either before the end of the workday or shortly thereafter, eliminating any chance to practice during the week. The extra hour’s daylight and this week’s break in the cold weather made it possible to stop by the club on the way home and hit a bag of balls or two on the mats at the practice range.

This year’s early DST shift provided a welcome earlier opportunity to try to recapture some kind of golf swing before the opening of the season.

The changeover might add a little more to a golf pro’s schedule, but the added hour is certainly appreciated by a lot of their members. 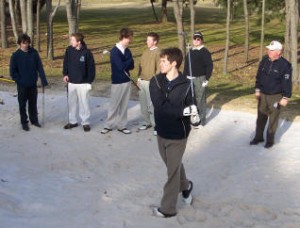 On March 12 I caught up to the combined varsity and junior varsity teams at the practice facility of Rehoboth Beach Country Club, their usual home course.

Varsity Coach Claudio Smarrelli is back again for another season, and was his usual sunny, optimistic self.

“We really have a strong team this year, with all the returning players,” he said. “I look for these guys to have a good winning season.”

This year’s co-captains are both seniors. Samantha Purple is likely to be among the top contenders among the girls playing in the co-ed sport throughout the state, based on her strong finish in last year’s state championship. She also just completed her final season on the Cape girls’ basketball team, so she’s certainly in good condition for the far less physically strenuous demands of high school golf.

Travis Parker is the other captain, and had a good year on Cape’s boys’ soccer team last fall. He’s busy looking at several colleges, including the University of Delaware, Towson University, and Franklin Pierce College in New Hampshire.

The other likely varsity players include veterans Tristan Karsnitz, Dan Scrutchfield, and Bradley Ha. Joining the squad this year are juniors Jimmy Johnson and Dino Nardo, along with sophomore Nate Tanner.

Smarrelli also introduced me to Dave Inglis, the new junior varsity coach. “Chief” earned his nickname thanks to his long prior career in the United States Coast Guard. Now retired, he is working as a substitute teacher at Cape Henlopen High School. He said he looks forward to helping the junior varsity players learn how to play golf at Marsh Island Golf Course. Chief admitted to carrying a 12 handicap himself, so the kids should be able to learn a fair amount from him.

“We are fortunate to have the cooperation of the local clubs,” Smarrelli also noted. In addition to Rehoboth Beach CC and Marsh Island, the varsity will also host some competitions at Kings Creek Country Club. The current schedule calls for the Caesar Rodney match to take place on the tight, wooded layout, as well as the match against perennial powerhouse Dover High School on March 29.

In a future column I’ll list the junior varsity golfers, who were busy hitting range balls with varying degrees of success as I watched them.