Cape picks up three more wins and a ranking

The Vikings traveled to Seaford Country Club on Thursday, April 26, and eked out a 171-173 victory over their hosts from Seaford High.

Tristan Karsnitz took medallist honors for the first time this season with a four-over par 40. “I had two nice birdies,” he said. On a short par 3, he hit a wedge to about 30 feet, and drained the putt. His other birdie came on a par 5, where his lob wedge approach stopped dead five feet from the hole.

Dino Nardo came in second among the Vikings, one shot behind Karsnitz. Sean Toner continued to contribute to the team scoring as a recent member of the varsity, with his 44. “My first four or five holes I had pars. Then I stopped hitting it straight,” he said. “I had a four on one hole and an 8 on the next one.” 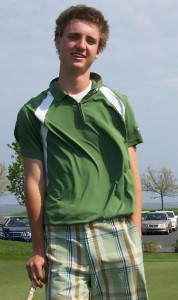 Travis Parker finished among the top four scores for Cape with his 46. “It was a rough day,” he said.

Cape’s next match was a home meet on April 30 against St. Thomas More. This year the Catholic private school has only been able to field four players, and they are novices.

Viking co-captains Parker and Sam Purple and Parker talked it over before the match, and decided to have the lower half of the Cape squad face off against their overmatched opponents. This kind of sportsmanship doesn’t happen often enough.

Dan Scrutchfield surprised himself with a medallist round of three over-par 39 on Rehoboth Beach Country Club’s front nine. The team’s 190-241 victory was also the first match of the season in which the par-3 19th hole was not used.

Scrutchfield said he had pars on 1,4, 5, 7, 8, and 9, which was pretty remarkable considering the high wind conditions. His approach shot on the par-5 ninth hole was from just in front of the tee boxes for the adjacent number 1 hole–far away from the normal layup zone.

Sophomore Zachary Murr did well in his first-ever varsity match, shooting a 48. “I parred number 5. I would have parred number 6 if my first drive hadn’t gone in the water. After that I hit about 180 yards into the wind to the green, and made a 10-15 footer for bogey.”

Bradley Ha shot a 53, while Toner added his 50 to the team score.

The regular varsity returned to competition on May 1, and beat Smyrna in a home meet 165-180. Travis Parker shared co-medallist honors with Smyrna’s Mike Skinner, with both boys scoring two-over-par 38s.

“I had two three-putts,” Parker said, but his play on the par-5 fourth hole earned his attention. “I was about two hundred yards out, downwind, and went for the green in two, but I shanked it into the water instead. Then I hit a 9-iron about 150 yards to the front right of the green. The pin was all the way in the back, about 50 feet away, and I made it for par.”

Purple had her best competitive round of the year, a three-over par 39. “I had no three-putts,” she said. “I had three bogeys on holes I didn’t get on in regulation. I had 6 holes in regulation, and made 6 pars,” and smiled at the memory.

Nardo scored a 42, but he wasn’t happy about it. “I could have done better. I just couldn’t putt and chip very well.”

Karsnitz and Scrutchfield tied for fourth among the Vikings with their 46s. Karsnitz said, “I had three three-putts and no one-putts.” Scrutchfield said his chips weren’t close, and he bogeyed the eighth and ninth holes by hooking out of bounds.

This week the Viking squad also made the state rankings for the first time this season, placing fifth. It will be interesting to see if the folks doing those rankings take into account the squad’s switch-up for the St. Thomas More match, when considering next week’s results.