It’s not often one thinks about whether the most appropriate audience for a deceptively straightforward golf book is limited to a segment of the population.

There are, of course, books obviously aimed at the children’s market (“The Teletubbies Play Pebble Beach,” and such). On other occasions, however, those in a particular adult age group are perhaps best suited to appreciate other golf books. 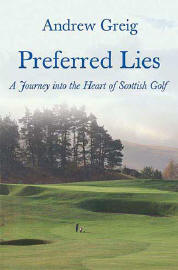 Preferred Lies: A Journey into the Heart of Scottish Golf

That notion kept returning to me while reading Preferred Lies: A Journey into the Heart of Scottish Golf, Andrew Greig’s moving memoir of an unusual year of golfing in his native Scotland (Thomas Dunne; $23.95 SRP).

On repeated occasions, I found myself deeply appreciative that someone had put into words what middle-aged golfers often think about, as they play a game they’ve most likely enjoyed for half of their life or more.

Men and women golfers in more advanced years might read this book and think back to that same frequently fretful period in their past lives, as thin smiles cross their lips.

Younger golfers, already a bit slow to respond when presented with the opportunity to put down their clubs and pick up a book, will not have enough life experience to appreciate fully what Greig describes.

For those of us in the middle, however, this book is perfect.

My review copy has more than a dozen turned-down page corners for returning to some of the more compelling passages. That does not happen often.

The book’s inspiration in a health crisis is common enough for those in the fourth decade or beyond. Something went seriously wrong with Greig’s brain. He was close to death until a surgeon devised a life-saving solution. That event caused Greig to reassess his life and how he lived it, a previously adventurous history involving high-stakes mountain climbing and other pursuits.

Serious illnesses and the death of parents, both common occurrences once past a certain age, often inspire taking stock of one’s own life, even as to the choice of recreation or sport.

This short sharp personal reminder about his limited time on earth motivated the Scottish poet and novelist to revisit his relationship with golf. A former schoolboy prodigy, Greig lost interest in the game for a while, and then returned to it—but not with the same attitude.

As he recovers from the surgery and its aftereffects, Greig begins a meandering tour of over a dozen Scottish courses, from North Ronaldsay in the far north to Gigha and Machrihanish in the southwest.

Greig describes how he now feels about playing golf, from strategy issues to the architectural elements of the widely varying Scottish golfing landscape, to new equipment, as well as the proper relationship to maintain with one’s playing partners. Many readers will find themselves nodding in agreement on many of these passages, primarily those who are also well past the sense that a certain score or handicap is the point of it all.

He also appreciates how and why others might not approach the game the same way he does, based on their own golfing experiences. One extended segment is based on a series of rounds Greig played with the Fairways to Heaven golfers, a group that a more vicious chronicler could easily describe as irretrievably New-Aged.

Greig is far more kind, however, and welcomes their individual ways of finding broader inspiration in this allegedly pointless pursuit. Similar shared playing experiences with others, including a very old man and a German tourist, are also fondly noted.

The book’s title itself is a bit of a pun. The game is generally based on playing the ball wherever it is found, but its rules permit adjustments under certain conditions. That indulgence is among the reasons why golf is an imperfect metaphor for life. Most of us are willing to accept that alleged flaw. At this stage in our lives, how often can we think of situations off the course where we would have liked to enjoy the same opportunity, but won’t?

This is a very fine memoir, and should appeal to a very wide, very experienced audience. It is simply one of the best golf books of the year.