Being a little too world-weary can have an unfortunate influence on the proper attitude to maintain when reviewing some kinds of golf books. 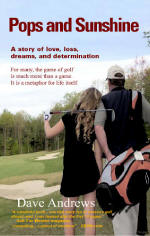 Pops and Sunshine: A Story of Love, Loss, Dreams, and Determination

For example, after reading Pops and Sunshine, Dave Andrews’ new coming-of-age novel, my inner cynic was screaming to be let out. ($19.95 SRP).

All I could think about was how much this book reminded me of Greetings from the Shore, a cute little movie that played to several sold-out audiences during the Rehoboth Beach Independent Film Festival last November.

In the movie, a very young, very pretty Kim Shaw plays Jenny, a freshly graduated high school senior who drives alone to a north Jersey beach resort for a summer job. Still grieving over her father’s recent passing, she needs to somehow make enough money to go to the college of her dreams.

Thanks to the timely assistance of an unusual father figure that comes into her life at this critical juncture, as portrayed by Paul Sorvino, it all magically works out just fine by the end of the summer and the end of the movie.

The film also features a summer romance, as well as a few precarious moments involving folks who don’t have Jenny’s best interests in mind.

If I was an 18-year old girl, I would have really, really loved this movie. As a middle-aged guy, however, it seemed like the cinematic equivalent of cotton candy—fun for a few bites, but way too sweet for my tastes, and with nothing substantial to it.

Without spoiling the whole story of Pops and Sunshine, here’s a short description.

A very young, very pretty Lisa Nelson drives alone to a New Hampshire golf course, where she’s about to play the final tournament of the year on the Duramed™ Futures Tour. Still grieving over her father’s recent passing, she needs to somehow win the tournament to make it onto the LPGA Tour, and help save her mother and young brothers from financial ruin.

Thanks to the timely assistance of an unusual father figure that comes into her life at this critical juncture, it all magically works out just fine by the end.

The book also features a short, intense romance, as well as a few precarious moments involving folks who don’t have Lisa’s best interests in mind.

With all due respect to my fellow cynics, however, I should be more kind, and will be.

If I were a young junior golfer dreaming about making it to the LPGA, this book would be a fun little wish-fulfillment fantasy (although someone should have a chat with Lisa about rushing too fast, in the girl-meets-boy context).

The book will also remind the young women who are its best audience that the path to the pinnacle of women’s professional golf is narrow, tricky, and filled with opportunities to fall off. The tournament action passages actually present a well-written cautionary tale about how difficult this goal really is for most golfers, no matter how good they are, and how much one’s success will depend on the help of many others along the way.

Is this book hokey? Yup.

Is it predictable? Absolutely.

It’s also sweetly charming, and should be enjoyed by a young audience not yet plagued with cynicism.

Many golfers are familiar with a wide range of golf slang to describe certain kinds of golf shots, such as shanks, chili-dips, duck hooks, slices, and so on.

Tim Conlon sent out a list of new golf terms, a few of which are suitable for repeating in a family-friendly newspaper.

A “Linda Ronstadt” shot just blew by you, while a “Saddam Hussein” shot goes from one bunker to another.

On the other hand, two shots in a bunker is obviously an “Adolph Hitler.”