The book first appeared in 1957, but remarkably remains in print even today, with millions of copies sold.

The famously taciturn Hogan, whose 64 Tour victories were just last week matched by Tiger Woods, touted his book as containing all that any amateur needed to learn a repeating swing and break 80.

I re-read my copy about every other year or so. Hogan’s descriptions of not only the hows but also the whys concerning the basic elements of the golf swing are very good for beginners. They are also a useful refresher course for more experienced golfers as they prepare for the new season. In addition, Anthony Ravielli’s finely wrought illustrations are a great way to compare your stance and grip to the methods Hogan recommended.

On the other hand, some of Hogan’s recommendations never seemed to match up with my own experience. To cite one major example, he stressed placing the ball pretty far forward in the stance. For me, this is usually a great recipe for a slice, especially with my driver. Over time, I held onto most of what Hogan preached, but made some adjustments to deal with slicing and other unwanted results from the parts that didn’t work for me.

According to a brand-new book about Hogan, there may be some very good reasons why my own attempts to match his swing mechanics were never as successful as desired. 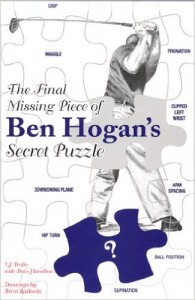 Mississippi golf professional V.J. Trolio collaborated with Dave Hamilton, an engineer with a few golf equipment patents to his credit. In cooperation with the Hogan estate, they declare that they have discovered The Final Missing Piece of Ben Hogan’s Secret Puzzle ($29.95 SRP).

The slender volume is best understood as a supplement to the original Five Lessons. In large part, however, it could also be called “The Sixth Lesson Hogan Didn’t Tell You.”

Trolio and Hamilton spent many hours reviewing old movies and video clips of Hogan playing, including an important bit of footage from the 1967 Masters Tournament, where Hogan played very well from tee to green. This particular 8mm home movie showed Hogan from his rear side, with the cameraman lined up in the same way as Hogan relative to his swing. From that unique perspective, Trolio and Hamilton determined that Hogan’s swing was not exactly as described in his famous book.

Given Hogan’s penchant for keeping useful information to himself, this actually makes sense. Hogan didn’t exactly mislead his readers when he told them to turn their hips a certain way during the downswing. On the other hand, as this new book shows, it is also important to know exactly when to make that hip turn, with what kind of weight shift to the left leg, and at what point in the swing.

I can’t really describe much more without potentially giving away the whole point of this new book. On the other hand, as Trolio and Hamilton lay out their argument, complete with physics calculations and graphics overlaying still shots from that old movie, it makes a lot of sense. To cite one major example, their suggested version of Hogan’s secret fully explains why he didn’t slice the ball off that far-forward stance.

The writers also describe how golfers can teach themselves the “real” Hogan swing. They stress that it won’t come easily at first, especially for golfers whose swings have been with them for a long while. In addition, they explain why this swing technique bears no relationship to the current “stack and tilt” fad now running its way through some of the younger PGA Tour players.

The authors also note that the Hogan Estate heirs requested that any royalties coming to them from their cooperation with this new venture should be donated to the new nonprofit Ben Hogan Foundation. From all indications, this book should help further Hogan’s legacy, as intended.

It should also help a lot of golfers have a lot more fun.