I’ve been just as good this year as the years before, and so far you haven’t seemed to hold that against me when it comes to the Christmas gifts found under my tree.

Nonetheless, just to make sure there’s no confusion I wanted to make you aware of the kinds of golf-related items that you should definitely not bring down our chimney.

As you know, I don’t mind dressing up for golf. In fact, I subscribe to something Billy Crystal once said while playing a character on Saturday Night Live: “If you cannot be good, you can at least look good.” 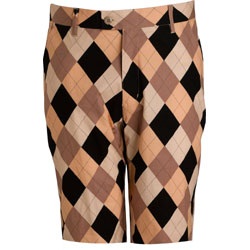 That’s why there’s just no way you could ever convince to wear these Loudmouth Argyle Shorts, available from gifts.com for a startling $69.99 per pair.

The ad copy says these “colorful” shorts are “guaranteed to turn heads on and off the course,” and that’s certainly true. On the other hand, they also look like they could get me beaten up by the fashion police, and they would be justified.

I also have fond memories of my old comic book collection, and a new golf gadget reminded me of an advertisement that used to always appear on the back page of those books. I’m referring to the X-Ray Spectacles that promised to give every teen-aged boy the chance to see through anything, especially women’s clothing if I recall correctly. 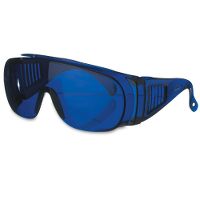 For middle-aged men, the folks at Hammacher Schlemmer have come up with a new alternative. Their Golf Ball Finding Glasses are made with specially tinted lens that they claim will make it easier to find golf balls in dark background conditions, such as in the woods just off the golf course. These blue plastic glasses are large enough to fit over your prescription lenses, so they’re also sure to make a bold fashion statement as soon as you put them on.

As I see it, if you’ll excuse the pun, the $39.95 they’re asking for these glasses could be better spent on a lesson on how to hit the golf ball so it doesn’t fly off into the trees. 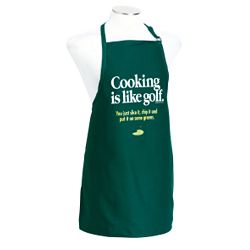 You may recall that I also really enjoy cooking, and even have an apron from a session at the New Orleans School of Cooking to show for it.

However, that doesn’t mean I would want to have a solid green “Cooking is like Golf” apron as an alternative for my next meal preparation, even at only $22.95.

As described by golfsmith.com, “This festive golf apron states, ‘Cooking is like golf. You just slice it, chip it and put it on some greens.”

Festive. Yes, that’s the word for it.

Sometimes a suggested golf gift provides its own sense of mystery.

For example, the ad copy at golfcollectablesandgifts.com for their Decorative Music Box tells you that it features a “lithograph of a beautiful painting of the 18th Hole at St. Andrews” on the cover, which is fine as far as it goes. 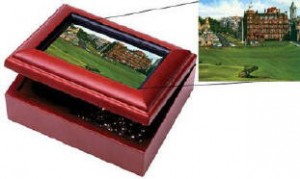 But that’s exactly as far as it goes—there’s not a word in the entire web page that says what is the music that will come out of that box.

At $42.95, I think I’m entitled to know if this thing will be playing the theme song from Caddyshack, or the theme from Rocky, or whatever. 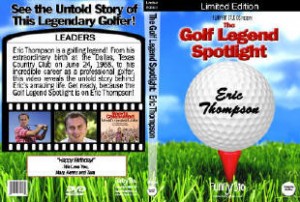 On the other hand, if you gave me the Golf Legend Funny Bio DVD, personalized with my photograph and name, I know exactly what will be part of the package: “Our family-friendly 10-minute-long film short features a professionally written script, interviews with actors posing as golfing greats, clever graphics and crescendoing music similar to what you’d hear on a prime-time sports show.”

Wow. “Crescendoing” music and everything.

And finally, Santa, there’s one last golf gift I really, really don’t want. It was highlighted in Dave Barry’s Christmas Gift Guide in the November 30 Washington Post Magazine. It’s called the Uroclub, and that’s not a misspelling of one of the continents.

The Uroclub is a special golf club that has an extra large, extra long hollow “grip” of sorts.

Draping a towel over the golfer’s belt, the player is supposed to have a bit more privacy in meeting a very special need that sometimes comes up at inconvenient times on a wide-open golf course.

Thanks again, Santa, and have a Merry Christmas. Say hi to Mrs. Claus and the elves for me.