Some act on their growing sense of mortality by trying to recapture their youth, sometimes with wretched results for their marriages or other important parts of their lives.

Other middle-aged folks find far safer outlets to express themselves. For example, at one point I thought I would buy a “Midlife” vanity plate for my new little sports car, but someone already has it.

At age 47, David Wood took his own route to explore the effects of middle age, and it was a real doozy. 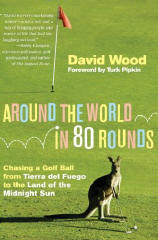 Around the World in 80 Rounds: Chasing a Golf Ball from Tierra del Fuego to the Land of the Midnight Sun

The stand-up comedian sold his home, put his remaining few household items in a storage unit, and took off for the ultimate golf trip, which he recounts in Around the World in 80 Rounds (St. Martin’s Press; $25.95 SRP).

As a single man, with no significant family ties to temper his enthusiasms, the avid golfer set out on a unique quest: to play golf at the southernmost and northernmost courses in the world, and a wide assortment of golf courses in between. The Seattle resident is a longtime public course fanatic, but that didn’t limit him in trying his luck at an incredibly wide assortment of golf courses, both public and private, on all of the world’s continents except Antarctica.

If some intrepid scientist down there had set up a red-ball layout in the snow near the Amundsen-Scott South Pole Station, Wood would probably have finagled his way down there, too. He came close enough, however, with a round at the bottom of South America, on a weather-beaten little 9-hole track in Tierra del Fuego.

From there Wood golfed his way north through Argentina, Uruguay, Bolivia, and Chile. He discovers a recurring fact about much of golf in countries other than his own—it’s mostly a sport of the very rich, especially in those places with a tiny middle class.

In some respects, his observations match what took place with golf in America in the late 19th and early 20th Centuries, before the massive increase in employment and living standards after World War II. For much of the developing world, that change has yet to occur, and until it does will continue to affect how non-players perceive golf in many places.

Wood then travels to New Zealand and Australia. Scots and Irishmen immigrated there, sometimes voluntarily and sometimes not, and brought their favorite game with them. These chapters of the book are the most tempting for those perhaps contemplating a trip following in Wood’s footsteps.

He then went north to Asia, where Wood had the widest variety of travel experiences to go with his golf. Apparently our boy is a big fan of massages, because we’re treated to several lengthy descriptions of this traditional way to relax after a round in Singapore and Thailand.

Wood was also impressed by his travel and golf in India, but not in a good way.

South Africa was next on his itinerary, and Wood’s exposure to the best and worst of that country and Zimbabwe was perhaps his most politically astute part of his trip. These chapters also marked a distinct change in tone, from the nightclub comedian voice he used in the first half of the book, to something far more serious with respect to what he saw outside the fairways and greens.

Wood travels north to Egypt, then Europe, then Russia, and then to TromsØ, Norway, for his last round of this amazing adventure.

What Wood did is not something I would have ever contemplated for myself, but then again his life story and mine are also not alike. I have the feeling that Wood began this trip with the self-centeredness of many singles, but finished it with a very different understanding of how he fit in the world at this point in his life.

That makes Wood’s book far more than an eclectic travel story, and well worth your reading. 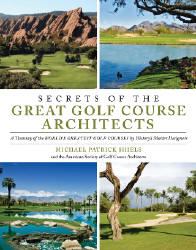 Secrets of the Great Golf Course Architects: A Treasury of the World’s Greatest Golf Courses by History’s Master Designers

Great pictures, and some interesting insights into a profession many golfers daydream of practicing for themselves.