The Cape squad suffered its first loss of the season April 12 to Sussex Tech, 189-196, at Peninsula Golf Course in Millsboro. Inglis noted that the match took place in rain and windy conditions. “At one point during the match the rain came down very hard for at least ten minutes. All the players got soaked. But the conditions are the same for both teams.”

Inglis also mentioned that for the Sussex Tech match, Cape was missing Devin Medd, “one of our top players who has medaled twice this year, with scores in the thirties.”

The coach felt that the high point of the match was Shane Ghigliotty medaling with the low score of 41.

Inglis said, “It was close. We only lost by 7 strokes, so had the other players been able to come in with scores that they have in past matches, just taking off a few strokes for each player, we could have come away with a better outcome.”

The following day Cape bounced back with a win over Laurel, 181 to 240 at Rehoboth Beach Country Club. Inglis said Shane Ghigliotty birdied the last hole to score 42 taking the medal from Nicholas Purnell. The coach was also pleased to note that James Fenstermaker came in with a 47. In addition, Casey Bittner had a 49 in his second match of the year. Inglis said Bittner’s performance was “a great improvement over the 62 he shot his first time out.”

Chip Newton, a golfing buddy of mine, has a vivid memory of where he was and what he was doing on Masters Sunday in 1986.

The Florida businessman had to take a plane flight in the middle of the final round, and vainly searched for an open spot in the airport bars to watch the tournament. He then boarded his plane, still trying to find out what was happening.

Shortly after takeoff, the pilot addressed the passengers. Instead of discussing the upcoming flight, however, he told them that Jack Nicklaus had just birdied the thirteenth hole. Newton said, “The whole plane went nuts!” 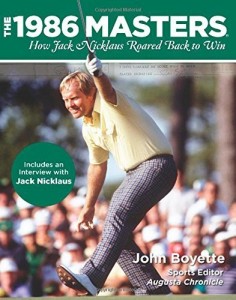 1986 Masters: How Jack Nicklaus Roared Back To Win by Boyette, John (2013) Paperback

This year marked the 25th anniversary of Nicklaus’s final major of his remarkable, Hall of Fame career. Naturally, the story of this particular triumph would make a nice book subject, and Augusta Chronicle Sports Editor John Boyette took advantage of the opportunity. The 1986 Masters: How Jack Nicklaus Roared Back to Win is a well-written golf history that golf fans should find a way to put on their bookshelves (Lyons Press; $24.95 SRP).

The book features interviews with Nicklaus and his family, including his wife and his son Jackie, the caddie for his father during that historic event. Others interviewed include Tom Kite and Greg Norman, who had the last chances to deny Nicklaus his sixth green jacket, but who both faltered on the last hole.

Boyette also describes how Nicklaus came to use the now-famous MacGregor Response putter during the tournament. It is an interesting sports business story in it’s own right, because Nicklaus’s triumph led to a boom in the putter’s sales. It is perhaps one of the best product placement stories in golf.

The highlight of the book, of course, is the recounting of the back nine on Sunday, where Nicklaus fired a 30 and then waited for the others to finish. Even for those familiar with the story, it makes for fun reading.

The 1986 Masters was a classic, not solely because of Nicklaus. For millions of fans like Chip Newton, it was one of those rare sporting events that makes you recall where you were when it happened.

Boyette’s book brings that fun back to its readers.