Tree cutting and a bit of tree planting, too

Shortly before Christmas, I took advantage of an alleged improvement in the weather to play a Sunday round at Rookery North.

Conditions soured almost immediately, however, as a combination of Auntie Em-like winds and heavy rain brought a halt to our round after only four holes. 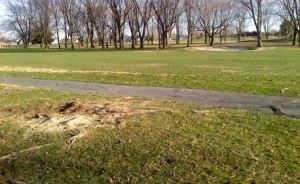 The roots of the tree that used to be here damaged the adjacent paved cart path. That and other reasons caused the tree to be cut down.

Nonetheless, while out on the course I had enough time to notice that the maintenance crew at the former Shawnee Country Club had been busy with their chain saws on several holes. A recent phone conversation with Rookery course manager Chris Adkins confirmed the scope of his gang’s tree-cutting endeavors.

“We got all the dead ones, I think. We marked them for removal before the leaves fell a couple months ago,” Adkins said. “In addition to the dead ones, which were all over the course, we are also doing some clearing at the edges of the woods along the second and seventeenth holes,” he said.

“Along the second fairway, we’re trying to clear the trees back to the stream that runs through the woods. It’s a nice stream, and people should be able to see it. It runs very close to the second green,” Adkins explained.

He said that one of the major reasons for the tree clearances in those areas was to improve airflow, which the Rookery crew’s past experience with the area west of the first hole and eighth tees showed to be beneficial. “We saw how well that worked, and I’m hoping that doing the same thing will help with these other holes,” Adkins said.

I reminded Adkins that when the course expanded to 18 holes in the mid-1980s, he was a young greens superintendent, and had planted several pines behind some of the new holes to add some definition to the formerly open landscape.

“And now, some of those trees have to be thinned out,” he said. “There are a couple pines behind hole number 3 that should come out. I’d like to get that cleared up. That will help the green and the remaining trees.”

Many golfers don’t realize that trees compete with turfgrass for light and air. If left alone, the trees will always win.

Course superintendents occasionally have to be a bit brutal about thinning the tree stock, in order to keep the grass thriving. Nonetheless, parkland courses are popular in part because the combination of trees and turf is pleasing to golfers’ eyes.

There’s a bit of a balancing act required for course superintendents in managing the grass and the adjacent “aerial biomass hazards” common to Cape Region courses and many others.

For example, at Rookery South, Adkins is scheduling a series of tree plantings for his wintertime projects. “We’re trying to define some of the holes a little better with the trees, such as between the eighth and tenth holes, and between the tenth and eighteenth holes. I’m not suggesting the new trees will cut down on the wind all that much, though,” Adkins said.

He’s not sure yet which kinds of trees will be going in, but is “leaning toward” a mix of pines and deciduous varieties. Adkins is not interested in adding to his falling leaf maintenance burden at Rookery South, especially with the annual challenges those leaves already present him at Rookery North.

As for other course projects, Adkins mentioned plans to enhance the target greens at the Rookery North’s practice range, and the prospect of improving the chipping areas as well.

The reduced winter staff should be able to stay busy with these and similar projects in the next few months.

Cape Region golfers should notice the improvements when the warm weather returns.