During the PGA Merchandise Show in Orlando, FL on Jan. 21, I attended a special “Inspire Greatness” session on women in golf, moderated by PGA of America Secretary Suzy Whaley.

The speakers were Molly Solomon, Executive Producer for the Golf Channel, with a longtime NBC Sports background; Donna Orender, a former WNBA Commissioner and former pro player herself; Lynne Doughtie of KPMG, Vice Chair of the company’s Advisory Practice; and Paige Mackenzie, an LPGA player and Golf Channel personality.

Doughtie’s presence helped highlight KPMG’s new sponsorship of the Women’s PGA Championship, held in June this year at Westchester Country Club in Rye, NY. She said the company is proud to help develop the game for women with the Championship, and noted it will be accompanied by a variety of year-round community activities.

The KPMG executive said the large purse ($3.5 million) and NBC coverage would also help, and she expected more women to participate in the event’s pro-am, giving themselves valuable networking opportunities. Similar to the PGA Championship, the Women’s PGA will include in the field of 156 players the top eight finishers from the LPGA Teaching & Club Professional National Championship.

The women discussed some of the gender differences they’ve seen in their careers. Solomon said woman feel the need to show they’re good before venturing beyond their current levels, while men don’t seem to have that problem. Solomon also credited former NBC Sports executive Dick Ebersole as pushing her to try new challenges.

Mackenzie credited her golf coach at the University of Washington with seeing “more in me than I saw.” She described her initial self-doubts when Golf Channel producers would ask her to handle new assignments, but now she readily accepts the push.

Orender said she no longer thinks people in executive positions should believe that leading by example alone is sufficient, as she once thought. She suggested pushing for understanding of potential candidates, and said that coaching to be the best is also required.

Whaley noted the tendency of women to expect to be invited, and said they should step up and volunteer, just as men do. Doughtie agreed, and said women should ask themselves “Who have I told about my goals? Don’t wait to be tapped on the shoulder.”

When asked about failure, Mackenzie said “In golf you fail every time. There are no 300 games in golf, like in bowling.” Citing the book “Mindset,” Mackenzie said she’s learned to “forget very quickly” and focus on making the next shot as good as it can be. Solomon also stressed the need for resiliency.

The women discussed their interpretations of the differences between mentorship and sponsorship. They agreed that a sponsor is an advocate beyond what mentors usually do, while also noting that the person being sponsored has to provide value to the sponsor.

I stopped by the Vineyard Vines display during the Show, largely because of the large photograph of PGA Championship winner Jason Duffner lying in a pile of smiling pink whales.

The preppy pastel clothes, which began with a series of ties sold on Martha’s Vineyard, are available locally at the Rehoboth Outlets. I have to admit that the little whale logo on the shirtsleeve is fun.

The fact that the company’s ads also feature Duffner’s stunning wife Amanda shows that the Vineyard folks know a thing or two about marketing.

The golf line will be available in the company’s 50 stores and over 500 green grass shops throughout the country. 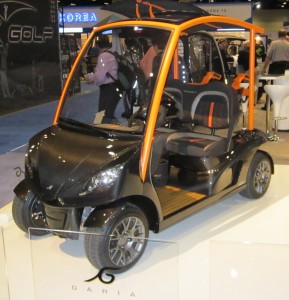 The golf cart makers have also signed up Masters winner Bubba Watson as a spokesman.

The Mansory Edition cart I saw included its own built-in refrigerator, leather seats, a teak floor and rear deck, and lots of carbon fiber in the cart body.