The Pro-Am Experience at the 2016 ShopRite LPGA Classic

On June 2 I joined an LPGA pro and four amateurs at Galloway National Golf Club for a pro-am round, an integral part of the 2016 ShopRite LPGA Classic.

Billed as the largest pro-am in professional golf, the Classic relies on four courses, two days of morning and afternoon rounds, and dozens of additional LPGA pros brought in to supplement the 144 who qualified to play in the 54-hole tournament. Well over 1,300 pro-am rounds are played, a logistical marvel of organization. 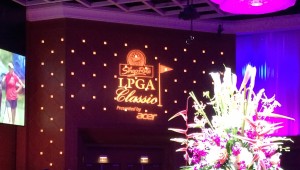 The Wednesday night pro-am party at The Borgata is very well-attended by pro-am golfers, LPGA players, sponsors, and VIPs for the ShopRite LPGA Classic presented by Acer.

The pro-am fees that range from $13,500 to $17,500 per foursome pay for more than just the golf. There’s a huge Wednesday evening party at the Borgata Casino in Atlantic City, with LPGA players mingling with amateurs, sponsors, and VIPs. There are meals and drinks during and after the rounds, prizes for long drives and closest to the pin, an impressive gift shop using “points” for redemptions, a framed photograph of each group, and awards for the top finishers in each round.

This year’s tournament raised over $1.5 million for a wide variety of local charities. The pro-am fees go a long way toward meeting that goal, along with the other costs of putting on a professional golf tournament, beyond the prize money.

The Golf Channel’s Karen Stupples, a Women’s British Open winner, led the 8:30 a.m. gang I joined. Lisa Cornwell, also of The Golf Channel and a great junior and collegiate golfer in her own right, caddied for Stupples. For this round, however, Cornwell used their cart, instead of lugging Stupples’ huge Callaway staff bag. 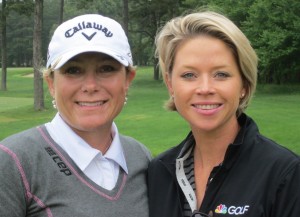 The four amateurs were in great spirits as the round began, and remained so throughout, not least of which because they combined for a 12-under par gross score on a difficult Tom Fazio design.

Kim Phipps is an Acer senior director for global marketing and brand, and admitted to a 12.6 handicap index. The California resident plays a few pro-ams each year, and has been an active participant in this tournament for several years. She hit some great drives and approach shots.

Kyle Gode is a director for client development for the Rational Agency in Seattle, Washington, and Acer is one of his own top clients. He enjoyed making the trip east, in part because it also provided an opportunity for a family visit–and the golf, too.

Gode was frequently the target of good-natured ribbing from the rest of the group, including Stupples. Late in the round, she repeatedly needled him as he tried to make a birdie putt, breaking up the entire group. Although Gode missed, and clearly didn’t mind the teasing, Stupples knew she had to make that putt after all the grief she dished out–and she did.

Susan Hess owns the Golftini apparel company, featuring high-end choices in skorts and tops. The successful New Jersey entrepreneur is also a long-hitting golfer. It was almost unfair that she could hit from the forward tees.

Cynthia Howard directs media sales for PGATour.com, finding advertisers to sponsor the popular video clips shown on the website. We had common acquaintances from her prior career with Sports Illustrated. During the pro-am, Howard had some troubles off the tee, but she also made clutch putts, including one for eagle on a par 5.

Skip Dargis is a regular caddie at Galloway National. He stayed busy by gathering tee shots, providing yardages, and advising how to handle the large, sloping greens. He said the course is recognized as one of Fazio’s finest, and it wasn’t hard to see why. I may have to finagle a round there myself sometime.

Stupples had a great time with her group, and was looking forward to returning to competition after a two-year hiatus. She also holds firm opinions about golf and how to play it, and is not afraid to express them. That ‘s probably why Stupples does a nice job as an analyst/commentator for The Golf Channel.

I asked her a tactical question about hitting a bump-and-run approach to the greens. Stupples gave a detailed response, using the Old Course at St. Andrews as an example, and listed several conditions before attempting that kind of shot (hint: the hole has to be very close to the front of the green, with a broad, safe opening to the target). 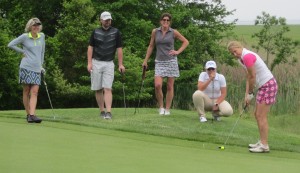 She used her four-iron several times, and that club is not often seen in the bags of many LPGA golfers. Stupples said that may have more to do with when golfers became skilled at the game, noting that she used to rely on a two-iron. However, she also opined that hybrids just aren’t as versatile as irons.

The last few weeks’ combination of travel for The Golf Channel and five days of practice for the ShopRite caused Stupples to mutter occasionally about sore muscles, but it didn’t seem to affect her play. She hit high, towering drives, and struck her irons and wedges with equal authority.

Stupples and Cornwell complimented their amateur group’s attitude during the round. Both have years of experience with pro-ams, and unfortunately not everyone is a pleasant playing companion. “This is a nice one,” Stupples said. “These ladies are fun.”

Cornwell said that in the pro-ams she’s played, the male amateurs rarely if ever try to outhit the pros, which I thought might be tempting for some longer-hitting guys. Cornwell implied that the kind of golfers who play in these pro-ams wouldn’t fit that attitudinal profile.

This was an enjoyable group to hang around with on the golf course. If this day was typical, I can easily see why pro-ams are a successful element of the professional golf tours.

Congratulations to Mike Brown and Sean Kilgore for holing out their tee shots on the par-3 15th at The Rookery South June 5. Unfortunately, both men left the course before the staff had a chance to find out which clubs they used for their holes-in-one.

Hudak won closest to the pin on the first day, and Joann Foster was closest for the second day’s contest.

Mary Beth Merolla, Judi Pezone, and Helene Guilfoy won the event, and Jeanne Drake won Closest to the Pin on the 13th hole.