A first look at the new Plantation Lakes golf course

In mid-June the first nine holes of the Plantation Lakes golf course in Millsboro opened for play, both for residents and the general public.

It’s the first new venue for golf in Delaware in several years, and a welcome addition to the current mix of Cape Region golf amenities. 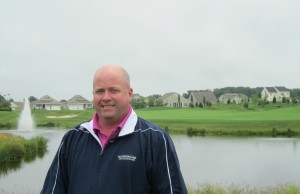 Steve Farrell is the Class A PGA head golf professional at Plantation Lakes. He’s been busy since last September preparing for the opening. We chatted recently at his temporary pro shop and out on the course, where he provided an informative guided tour.

“When the community first opened, they built the first six holes,” Farrell explained. “Last October they started the last three holes of what is the back nine. The mix of sodding and seeding worked out well, and we were able to open in June,” he said.

Plantation Lakes is a huge real estate development, by Delaware standards. Over 2,000 homes will eventually fill the property on the west side of U.S. Route 113, with its main entrance off Route 24. The project was hard hit by the recession, bringing a halt to construction for a few years, but home sales and new construction are now well underway.

Arthur Hills designed the course, and it’s his second in Sussex County, after Heritage Shores Club in Bridgeville. As with Heritage, Hills had to work with a pretty flat piece of acreage, but in this case he also had to address Betts Pond and Ingrams Pond, as well as the Long Drain Ditch that connects those two bodies of water. That gave Hills a bit more elevation change to work with, to which he added some dramatic earth moving as part of the overall design. 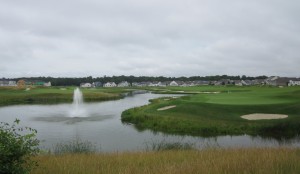 The 11th and 12th holes at Plantation Lakes, separated by a pond between them.

The alterations to the landscape are most impressive at the 11th and 12th holes, running side by side and with a long pond between them for their entire length.

Farrell took me to one of his favorite spots just off Plantation Lakes Boulevard, where the view of these holes was startling. The broad sweeping fairways and extensive bunkering are simply gorgeous.

Playing these holes, on the other hand, requires a good deal of thinking, while not being distracted by all the beauty. “Every hole here makes you think,” Farrell said. “The fairways are pretty wide, and you can hit the ball anywhere, but if you want the best approach to the green, you have to plan ahead.”

Water comes into play on nearly every hole, especially on the tenth and 12th holes off the tee. Golfers must decide how far their tee shots can really carry to determine the best line to the fairways. For other holes, the water element is off to the side, or closer to the green, requiring confident and accurate approach shots. 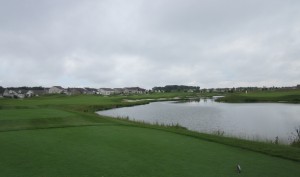 On the 12th tee at Plantation Lakes, golfers must decide how much of the pond to carry for their opening drive to the fairway.

The par-5 16th hole’s main fairway runs out just short of a marshy swale crossing it, well short of the green. The swale can’t be seen from where the second shot would normally take place. Long-hitting golfers can tempt fate if they desire, but most players would be well advised to lay up short of the swale for a wedge into the green.

The DSGA slope ratings recognize the challenges presented from the back tees, while the ratings white and red tee boxes are closer to average difficulty. As the course matures and is completed, I expect those rating will increase, but not so much as to discourage the typical bogey golfer.

The terms of the annexation of Plantation Lakes into the Town of Millsboro included a requirement the golf course be open for public play. How that will work in practice when the course is completed has yet to be fully determined.

A significant portion of the home sites are in what the developers call a “golf-benefited community,” requiring a monthly golf membership currently set at $89 per month. When the full 18 holes are complete, that fee will increase to an estimated $170/month.

For the next several years, however, those issues are not likely to impact public access to any appreciable extent.

The club is currently running a 2 for 1 special for public play, at $49.

The Kings Creek Ladies 9 Hole group played an Odd Out game June 29, where only the odd holes scores are counted toward the score.