How a tie becomes a win

Cape head coach Chris Krueger learned the next day that a Henlopen Conference tiebreaker rule means that the Vikings actually won the match.

During the April 5 contest against Dover High at Rehoboth Beach Country Club, Dover coach Steve Malkowski and former Cape coach Claudio Smarrelli, who came to watch the match, confirmed that several years ago the Conference decided ties should be broken by going to the fifth golfers’ scores for each team.

The Vikings immediately boosted that record to 4-1, with their closely fought victory over Dover, 191-201.

Michael Bollig and Kyle Monigle tied with Dover’s Riley Pelton for co-medalist honors, each posting 47s. This was also Monigle’s first varsity match of the season.

Matt Zehner’s 48 filled the third spot, and he admitted he “wasn’t sure” what has caused his scoring slump. Nolan Brown and Reed Jones tied at 49, fourth best for the Vikings for the day.

Bollig said, “There were some bad holes. I had some golden opportunities, but couldn’t capitalize on them. I’m all about my putting, and missed a bunch of them.”

Jones said his round was “okay,” understating his adventures on RBCC’s front nine. The sophomore had two pars, three bogeys, one double bogey, and three triple bogeys.

Krueger complemented the middle of his line-up for their recent mid-40s scoring: “They’ve really stepped it up.”

Many golfers are not fully aware of how much management their favorite layouts actually require.

For example, consider the sandy bunkers that challenge players at the edge of the greens, or along the sides of the fairways.

Bunkers as a golf course design feature were originally created by flocks of sheep evading the cold blasts of a Scottish winter on the links they grazed. The sheep burrows eventually filled with sand, and golfers recognized the benefit to their game from having these hazards on the course. 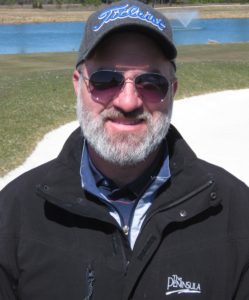 For course superintendents, however, maintaining these bunkers is a constant drain on their resources of time, staff, and money.

Andrew Ninneman is the course superintendent at The Peninsula Golf & Country Club near Millsboro. The North Carolina State grad has had a long career, with stints in Georgia and South Carolina before coming to The Peninsula in 2012. He oversees a staff of fifteen in season, and about six in the off-season.

For the last three years Ninneman and his staff have been engaged in a major restoration/rebuild project for the greenside bunkers at the Jack Nicklaus-designed layout. “In the first year we did holes one through six, the next year we did seven through eleven, and now we’re doing twelve through eighteen,” Ninneman said.

As originally designed and built, the Peninsula’s bunkers followed an industry standard at the time. It called for a layered arrangement of tile drains, then a two- to three-inch deep spread of pea-sized gravel, a geotextile fiber mat placed over the gravel, and topped with sand. The fiber mat is pinned in place with what look a bit like croquet hoops.

Over time, tears in the textile mat allow for silt infiltration, especially after extended rain events. As Ninneman said, “We average about 47 inches of rain every year, and a lot of it comes one or two inches at a time.”

The soil contamination blocks the drainage system, and eventually the bunkers exhibit all the signs of failure—ponding, excess compaction, and golfers hitting those textile mat pins.

Ninneman is now using a new bunker design, called the Better Billy Bunker Method®. He and I recently drove out to the course to see some examples of the work required to restore these hazards. 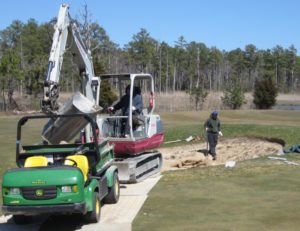 Peninsula staff remove the old sand and geotextile fiber as part of the bunker restoration.

The system continues to use a drain field of pipes underneath the bunkers, with a layer of pea gravel placed over the drains and over the entire bunker area. The new method then applies a sprayed-on polymer directly onto the gravel, binding the bits of stone together but still allowing rainwater to go through to the drains.

As Ninneman explained, the next step is to make sure the bunker sand grains are the right size to keep from filling in the spaces in the polymer-coated gravel, and then to apply it evenly throughout the bunker. He said the new system provides a significant extension of time between rebuilds, and also saves significant staff time in managing the bunkers after rain events and otherwise during the golf season.

The sand that is removed from the rebuilt greenside bunkers during the reconstruction is recycled, according to Ninneman. It is usually spread elsewhere on the course, such as in the fairway bunkers. Those hazards are also candidates for eventual restoration.

The refinished bunkers look great. With the new system in place, they could stay that way for many years.

The Sussex Pines Ladies 18 Hole group had its first day of play for the 2017 season April 11.