The Cape Henlopen High School golf team has a busy April coming up, with six matches spread out on either side of the spring break.

The Vikings split their remaining March matches, with a win against Laurel and a competitive effort while losing to Caesar Rodney.

Senior Matt Zehner earned medalist honors with a four-over par 40. Nolan Brown took second overall with his 45. Junior Michael Bollig made his scoring debut for the Vikings this season with a 48.

Freshman Ben Skelley made his first varsity start, tying sophomore Dane Palmer for the last scoring spot with a pair of 51s.

On March 30, Cape hosted Caesar Rodney on the front nine at Kings Creek Country Club. Brown won his second medalist honors for Cape with a two-under par 34. Unfortunately, the deep strength of the Rider squad overtook the Vikings, 158-175.

Zehner took second for Cape with a 7-over par 43, with Palmer finishing in the third Cape slot with a 45. Bollig and Skelley tied for the fourth position with 53s.

Cape Head Coach Chris Krueger commented, “Despite a season low score of 34 by junior Nolan Brown, Cape came up just short in a match between two golf school rivals. A great effort by both teams!”

Congratulations to Sarah Lydic of Ocean View, DE, who finished in third place in the Girls’ 10-11 bracket at the Drive Chip & Putt Championships, held April 2 at Augusta National.

The poised young golfer seemed unfazed by the national television coverage, and did well in each category, saving her best for the putting and chipping.

Kudos as well to the members at Bear Trap Dunes, dozens of whom filled the clubhouse for some additional TV coverage of their avid support of the Lord Baltimore Elementary fifth-grader. It was fun to watch them clap and yell during the event, thanks to a live feed from The Golf Channel.

A few years ago, I tested two shirts from the Devereux apparel company, makers of what they call Proper Threads. 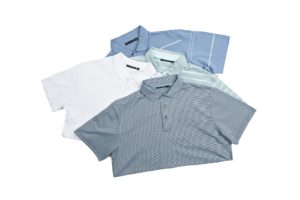 Devereux shirts are marketed to the millennial generation, suggesting that the shirts are a great look on and off the course.

At this year’s PGA Merchandise Show, I chatted with Robert Brunner, one of the company’s designers. He said they’ve “grown tremendously” in the last two years, and have expanded their offerings.

Brunner said the company’s goal is to design shirts that golfers will find handy off the course, as well as on. “We want them to be comfortable with wearing them for play, for travel, and to just go out,” he said.

Their leading shirt design is called the Andrew polo, retailing at $75 for the solid color. The fabric is a blend of 60% Pima cotton and 40% polyester, with a grosgrain detail resembling a fine-lined cord. The DX embroidery appears just below the collar on the back of the neck.

Brunner also showed me the Gravity Pants, sold for $125. These were super lightweight, made with a blend of polyester, cotton, and a bit of spandex for stretching. The right side back pocket is zippered, a fashion decision for Devereux but a potentially useful notion for golfers who travel. There’s also some interesting detailing in the stitching in the bottom foot or so of the pant legs.

Devereux’s Hybrid Shorts are made for quick drying, with the “moisture wicking” common to many technical fabrics. I think the mesh pocket interiors should also help players stay more comfortable in summertime heat and humidity.

The company’s apparel is available in men’s specialty stores, as well as online. Young PGA Tour player Danny Lee is one of the athletes wearing their clothes. He should be a good brand ambassador with the millennial generation that appears to be their primary demographic target.

Going for the flagstick

One proposed change to the Rules of Golf relates to the flagstick on the green.

Flagsticks help golfers see the hole location from far away. If a ball coming onto the green hits the stick, there are no Rules issues. The ball will either bounce off the stick or go in the hole, and that’s it.

When putting on the green, however, the current Rules require the flagstick to be removed from the hole. Otherwise, a penalty is assessed if the ball hits it.

Many golfers like to putt or chip from the fringe with the flagstick in place, especially on a downhill slope, hoping that it will be a backstop. Whether it works out that way is a total guess, but hope springs eternal.

Now consider a player putting from the green but at its edge, inches from the fringe. That flagstick has to go, or if she’s on target with the putt and strikes it, she earns a penalty stroke.

The USGA and Royal & Ancient now propose to eliminate the penalty for leaving the flagstick in the hole. The official explanation is to help speed up the game, which this certainly could do over the course of an entire round.

Comments on this and other proposed changes will be accepted until August 31. Just go to the USGA website and follow the links.

The USGA and R&A don’t expect any real advantage will develop from putting with an unattended flagstick in the hole. A ball can hit the stick and bounce out when it would have otherwise gone in, and vice versa.

In this case, however, the “rub of the green” could have a definite clanging sound to it.