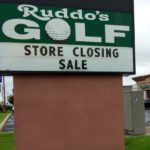 Bret Marshall is not happy about having to close the Ruddo’s Golf store on Route 1, but he is nonetheless thankful for his faithful Cape Region customers.

“We had twelve years here. I really appreciate the support we had, especially from many local golfers,” Marshall said. “We just couldn’t keep it going in the current retail climate.”

Ruddo’s Golf in Ocean City, MD will remain open, situated on Stephen Decatur Highway between several popular OC courses and the beachfront hotels that fill up with golfers in the spring and fall.

Marshall said the Route 1 store also benefited from its location near several Cape Region courses, but the competition from the Internet was just too much. “We knew about the Internet when we opened, but there are so many places online to buy golf stuff now. It’s hard to match them for price when you have the fixed costs of a retail store.”

After the Route 1 store closes Sept. 30, Marshall will start a new career in auto sales at the adjacent Boulevard Ford dealership. He’s been in golf for 28 years as an assistant golf pro at several locations, and maintained his PGA status as a partner in Ruddo’s Golf. His sales experience should help him with the transition.

The Fund is a well-managed program that has helped many Cape Region junior golfers with their college expenses, as well as deserving candidates from throughout the state. The popular tournament raises most of the money needed to keep the Fund going.

With lunch at 11:30 a.m. and a shotgun start at 12:30 p.m., the playing format is one best ball of four net. Players without a USGA handicap will have their scores computed using a modified Callaway system.

The entry fee of $160/player or $600/foursome includes the range, lunch, golf with cart, a cocktail hour with hors d’oeuvres, and prizes. A silent auction takes place after the round.

While the tournament replenishes most of the Fund’s needs, there are several other ways to support it, including golf vacations and lessons that generate additional donations. For more information, contact the DSGA dsga@dsga.org or 302-234-3365 , or Ron Barrows at r.barrows@verizon.net or 302-227-4404.

While some apparel makers at the 2017 PGA Merchandise Show were relatively small operations, larger, publicly held companies were also there in force.

Oxford Industries has been in business for 75 years, based in Atlanta, GA. In addition to the Oxford line, the company owns the Tommy Bahama, Lily Pulitzer, and Southern Tide brands, all three of which have a multi-store presence in the Cape Region.

There’s another local connection with Oxford, which I discovered when I met Debra Miller, the company’s Vice President of Merchandising and Design. Miller is a 1994 UD grad and has been with Oxford the last four years.

When the company began, the manufacturing and knitting operations were done in the South. Nowadays, those parts of the business are carried out in Asia or other hemispheres.

Miller showed me a few pieces from the Oxford collection, which she described as “traditional but with a modern twist.”

The Mabry Coolmax® Polo features a chest pocket, tailored sleeves, and a button-down collar. There’s a nice use of contrasting fabric in the shirt’s placket that breaks up the otherwise solid color designs. Coolmax® is Oxford’s version of a technical performance fabric, which Miller said has great moisture management characteristics and a UPF50+ rating for sun protection. The shirts sell for $89 (SRP).

She also brought out a pair of Windsor Performance Pants. This flat front design, a lightweight mix of polyester and spandex, also uses spandex for the inside waistband. As Miller noted, a bit of stretch goes a long way for comfort and support when out on the golf course.

As with other apparel makers, Oxford’s logo is unobtrusive—a gold upturned horseshoe on a tiny bit of blue fabric, sewn at the hem of a shirtsleeve. For the country club and resort trade, Oxford kept the traditional left chest spot open for their embroidered logos, a customer service Oxford provides.

Jim Miller of Kings Creek CC, with Stan Zabytko of Play Golf Delaware, finished in second place net in the B Flight. Bob Quinn of Rookery South played with Vince Guglielmo of DuPont CC and won second place gross in the C Flight.