Sarah Hyde, the 2017 recipient of the Stephen R. Lett Scholarship.

Sarah Hyde of Rehoboth Beach won the 2017 Stephen R. Lett Scholarship, worth $2,500 per year for four years of undergraduate studies.

The scholarship proceeds come primarily from a summertime tournament fundraiser held at Kings Creek Country Club, where Lett served honorably and well as the club’s president for several years.

Hyde graduated in June from Cape Henlopen High School. A constant presence at the Kings Creek CC junior golf clinics as a little girl, she later switched to swimming and lacrosse. Hyde won a Delaware state swimming championship title in 2016, and competed for both Cape and the Sussex Family YMCA swim teams.

Hyde also made a name for herself in lacrosse, as a member of three state champion Cape teams. She was named an All-Conference second team player for lacrosse, and also earned Academic All-State honors.

She will attend the University of Delaware this fall, seeking a nursing degree.

Eligible high school students must be nominated for the scholarship by either members or employees of Kings Creek, but are not required to be otherwise affiliated with the club or be Delaware residents. An independent selection committee reviews the applications and selects the recipients.

In a statement issued prior to the event, Lett said, “With the high cost of a college education today, we are pleased that our tournament attracts so many players and sponsors who want to make a difference in a young person’s life. It’s a great tournament for a really good cause.”

This year’s fundraiser tournament took place Aug. 21, due to bad weather on the originally scheduled July date. The format used the single best ball of each foursome on par 4s and 5s, and the two best scores on the par 3s. 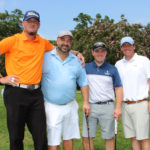 Prior to the afternoon shotgun start, head golf pro Kevin Wiest warned the 76 players about the eclipse and the danger of looking into the sun without the special glasses. Several groups had one or more pairs with them to see the unusual phenomenon, but the eclipse had no noticeable effect on playing time.

Ed Ota, Nick DelCampo, Kevin Conlon, and yours truly took third place net. Ota, a retired insurance company general counsel and Kings Creek member, really enjoyed making a birdie/net eagle on the par 4 10th hole at the height of the eclipse event. As his cart partner, I agreed with his suggestion that he should play during eclipses at every opportunity, because he did so well on that hole and several others.

For more information about the scholarship fund, go to lettscholarshipfund.com, or call 302-227-7172.

The entry fee of $60 per player ($45 for members) includes the greens fee with cart, net and gross prizes, and dinner after the round.

No word yet on whether any mulligans are earned by wearing your favorite team’s colors.

The team scramble event begins with registration and continental breakfast at 8:00 a.m. followed by a shotgun start at 9:00 a.m. Lunch and awards follow in the clubhouse after the round, with prizes available in several categories.