The three golfers, whose combined age of 47 made them the youngest team in the event, finished a single stroke behind the winning squad from Tennessee.

The tournament’s team format uses the best two scores of the three-player teams for three rounds. Brinker finished second in the individual competition, helped by a 4-under par 68 in the last round. She finished two strokes behind Julia Potter of Indiana. Cleary’s 5-under 67 in the second round was the best of the day, tied with Ashley Gilliam of Tennessee.

These three juniors from the Wilmington area are well known in Delaware golf circles. Brinker and Park both won the Delaware State High School championship, with Park edging Brinker in a playoff for the 2017 title. Cleary was part of the winning 2016 team from Tower Hill, when Brinker also won the individual competition. Cleary qualified for two USGA Girls Junior Championships, where she missed the cuts for the match play rounds.

Sherry Pie’ of Rehoboth Beach is the treasurer of the Delaware Women’s Golf Association, which has handled the qualifying for the Delaware team representatives and also helped fund team expenses.

“Delaware, being such a small state, was never taken seriously in this event considering the number and depth of the field. The young ladies who represented Delaware this final year changed everything. We are immensely proud of these young ladies,” Pie’ said.

The USGA’s State Team Championship tournaments began in 1996 as one-time component of the organization’s centennial celebration. The popular response to the event kept it going, although after 2010 the men’s and women’s championships ran in alternate years.

Because these Championships were held in the fall, collegiate players were ineligible under NCAA rules. State golf associations presented teams that were often a mix of juniors and mid-amateurs.

As reported by Golf Digest last March, differences in how state golf associations selected teams, among other issues, caused the USGA to decide to retire the championships. The Men’s Championship finished in September 2016.

The USGA has made similar decisions about its collection of championship events. The old Public Links titles were retired in 2014, and replaced by the Amateur Four-Ball championships.

Congratulations to Sawyer Brockstedt for her 6-stroke victory in the U.S. Kids Philadelphia Local Tour event Oct. 1 at Philmont Country Club. She won the girls 10-11 division against 17 other competitors, earning her a gold medal for her two-over par performance.

At the 2016 PGA Merchandise Show I had a nice conversation with Jackie Beck, a sales rep for New Balance shoes. She also coaches the women’s golf team at Central Connecticut University, which has played in the University of Delaware’s fall tournament at Rehoboth Beach Country Club.

In addition, Beck is a sales rep for Callaway Shoes, made under license from Callaway and bearing the familiar chevron logo.

We met again at the 2017 PGA Show, where Beck highlighted two of Callaway’s several models for 2017, the Coronado and the LaJolla. 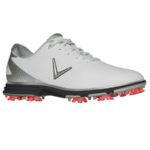 Can you tell this company is based in Southern California?

Retailing for $129.95, the Coronado features 9 Champ PiVix cleats, an Opti-Soft mid-sole, and a microfiber upper. The LaJolla, selling for $99.95, uses seven cleats. The outsole is noticeably wedged, with the thick end at the heel and a taper toward the toe.

Beck showed me how the insoles can be easily removed, for those golfers who want to use their prescribed or preferred orthotics.

The shoes are available at callawayapparel.com, as well as golf equipment stores such as Dick’s Sporting Goods, rockbottomgolf.com, and tgw.com.