Practice sessions should not be confused with pre-round warm-ups. 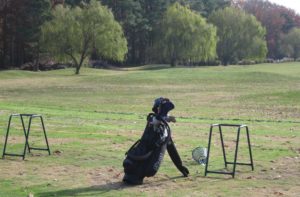 The practice range at The Rookery South

During a typical two-hour practice session, golfers are trying to fix a nagging swing issue, or maintain their sharpness in the days before tournament time arrives, or perhaps become accustomed to a new piece of equipment.

Warming up before a professional competitive round is different, as I observed during the 2017 ShopRite LPGA Classic presented by Acer. For most players, warm-up time seems to be focused on doing a bit of tweaking, or just assessing what their swings will let them do that day.

Here are a few examples.

Pornanong Phatlum is an accomplished Thai golfer on the LPGA Tour, and a steady presence there since 2009. Because she doesn’t drive the ball as far as others, however, Phatlum depends on a stellar short game – so I was not surprised to see her hitting partial shots to a practice green.

She stepped off the yardage from a marker on the range, and then confirmed the distance to two flags on the green with her laser. She told me she was practicing her 30- and 40-yard pitches.

With a slightly open stance, and her left foot toed in just a bit, she made smooth swings that looked to be taken halfway back and 3/4s through. A small divot appeared after each hit, naturally on the turf beyond the ball. Each pitch landed short of the holes, checked up, and stopped a few feet from each hole.

LPGA Tour rookie Bronte Law is from Stockport, England, and had a seven-win record for the UCLA golf team. On the range at the Stockton Seaview resort, the 22-year old hit her Titleist 917 D3 driver to good effect.

Law’s backswing stops well before parallel, about 3/4s back. She makes a fast, full turn through the ball, with a dead straight, mid-high trajectory.

As she blasted away, I stood next to her caddie, Brian Vranesh. He played on the PGA and Web.com Tours, and had toted Law’s clubs for her last four events. He said, “She can really compress the ball, and hits it longer than most. She carries it 250 at least.”

Sakura Yokomine’s swing is completely different. The veteran LPGA player from Tokyo has one of the longest backswings on the tour. Most golfers would not copy her technique, but it works for her.

The backswing is high, steep, and well past parallel. Viewed from behind, the club shaft aligns with her right ear as it dips down below her left shoulder, and then comes back smoothly for a very straight drive, with perhaps a 4-yard draw.

During one part of the warmup, Yotaro Morikawa, her husband/mental coach, faced Yokomine and held an alignment stick a foot behind and a few inches above the ground from the ball. As he explained, to guard against her tendency to raise her club too steeply on the backswing, the stick helps her begin her swing at a lower angle.

Beatriz Recari, a Spanish golfer with three LPGA victories, is apparently a fan of technology during her warmups. She stood astride an alignment stick, with another one stick set parallel to the desired flight line.

Recari placed her ball a foot or so from the T made by the two sticks, and made several impressive hybrid shots. A Trackman launch monitor sat on the ground a few feet behind her, with a Beatriz sticker on it. After a few shots, she would ask her caddie to check the smartphone sitting on top of the golf bag, to see what the Trackman was showing.

Tour rookie Nasa Hataoka, an 18-year old from Japan, was hitting one-armed half-wedges on the range, with her left arm grabbing her right shoulder, under the watchful eye of Mike Scott, her Scottish caddie from Glasgow. Scott said this practice method helps promote a fuller shoulder turn through the ball.

We also talked a bit about her warmup regimen before a round. He said they stick to a routine, with perhaps a bit of extra practice for the short holes. “We sometimes try to recreate a par-3 on the range, especially the more difficult ones.”

The Kings Creek Ladies 9 Hole group played a Low Net team game Oct. 11 for their final round of the 2017 season.