One of “those” days

Amateur golfers know full well that no round of golf goes as well as they hoped.

The same can easily be said for the pros.

During the final round of the 2017 ShopRite LPGA Classic presented by Acer, three LPGA players each had one of “those” days, each in their own way.

Yani Tseng is a former No. 1 golfer, with five majors on her resume. She’s been going through a slump, however, and as the day began was at 3-over par.

Marijo Uribe played for her native Columbia in the 2016 Olympics, and is a past U.S. Women’s Amateur winner. Uribe was at 2-over par.

Jackie Stoelting, a Florida Southern standout and Big Break winner, returned to the LPGA Tour in 2017 after placing third on the 2016 Symetra Tour money list. Like Tseng, Stoelting’s 3-over par for the first two rounds put her right at the cut line.

The round started out well enough, as each player made par on the first hole.

Then the second hole happened.

Tseng drove left into a mound of high fescue, and had trouble finding her ball. Once she did, Tseng chopped it out to about 150 yards, and made bogey from there.

Uribe’s second shot finished a few feet from the front of the green, about 35 feet from the hole, where she four-putted for a double bogey. 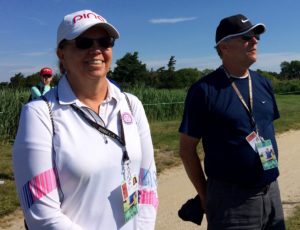 Teri and Ed Barenborg are the parents of LPGA golfer Jackie Stoelting, and came up from Florida to watch her play in the ShopRite.

Stoelting made a great eagle on the third, with a fairway wood shot from 234 yards to about 3 feet above the hole, while Uribe bounced back with a birdie. The Columbian made another birdie on the 4th. However, Tseng and Stoelting’s chips to that green didn’t go as planned, leading to bogeys.

Stoelting’s 100-yard approach shot on the par-4 5th hole went about 80 yards into a front greenside bunker and another bogey. She recovered on the next hole with a birdie. Tseng’s drive on the 6th into the left rough forced a second shot short of the green, and she couldn’t make par.

Uribe played steadily for a few holes, but then made bogey on the par-4 8th, despite being 15 feet from the hole in the front fringe after her approach. She bounced back again with a birdie on the par-5 ninth.

Stoelting hit her approach on the ninth hole into high fescue short and left of the green, forcing her to take an unplayable lie. Her chip shot went too far past the hole, for another bogey.

Uribe made bogey on the 10th, but all three golfers parred the tricky 11th hole.

Then it was Stoelting’s turn. Her pulled approach shot to the 12th hole’s narrow green rolled down the closely mown slope to the edge of the rough, 30 feet from the hole. A flubbed chip finished only a few feet closer. The next chip rolled several feet past the hole, and she made the group’s second double bogey.

Tseng continued to drive into trouble, with a wide right tee shot on 13 next to a tree, forcing a sideways shot back to the fairway. Then she thumped her iron into the turf, a rare sign of temper from the obviously annoyed golfer. She still made bogey, however.

Uribe recovered nicely from a tee shot on the 14th that finished on the oyster-shell strewn cart path left of the fairway, after first confirming with a rules official that she could remove shells and stones from around her ball. She made par after a 40-yard pitch shot to the green. On the other hand, Stoelting’s putt for par slid by for another bogey.

Tseng hit into a bunker on the uphill par-3 15th, but made par with one of her best putts of the day. Stoelting’s chip shot from in front of the green rolled too far, and she made bogey.

Uribe and Stoelting both made great birdies on the par-4 16th, but Tseng’s faded drive into a fairway bunker led to a second shot over the green and against a tree. She took several minutes to decide how to play her third, switching back and forth from a hybrid to a wedge. Tseng finally hit a chip with a wedge that rolled off the front of the green. Under the circumstances, bogey was a good result.

After three pars on the 17th, the players teed off into the wind on the par-5 18th. Tseng’s tee shot drifted right into a fairway bunker, forcing her second shot to go high and finish 160 yards out. She made a great third shot to the fringe right of the green, 50 feet away from the hole, but three-putted from there for bogey, 6-over for the day.

For her second shot from 234 yards out, Uribe hit driver off the deck, with a piercing trajectory that put the ball about 7 feet below the hole for a possible eagle. In a classy move, Stoelting immediately congratulated Uribe for the great shot. The Columbian just missed making eagle, but made an easy birdie for an even-par round.

Unfortunately for Stoelting, her third shot from 60 yards out stopped 20 feet past the hole. She left her first putt well short, made another bogey, and finished 4-over for the round.

Stoelting’s reputation as one of the LPGA straightest drivers remained in place. She hit 13 of 14 fairways, and made 11 greens in regulation. Iffy chipping was the main source of her troubles that day. Then again, Donald Ross greens can sometimes make even a good chipper look like a duffer.

For as much trouble Tseng caused herself off the tee, she never scored worse than bogey on any hole, a tribute to her skill at minimizing her mistakes. However, she left several birdie putts just short, and couldn’t offset the bogeys with any under-par holes.

Stoelting was steaming after her round, and not her usually sunny self. After a few minutes to reflect, she said, “It’s frustrating. But, I’m playing on a Sunday, and at least they give me a paycheck.”

Most golfers could easily respond, “Been there, done that. Next round will be better” – without the part about the paycheck, that is.