Most professional golf tournaments use a predetermined cut line to winnow down the competition for the final round or rounds. Typically 144 to 156 golfers start out, and the cut is set at the low 70 and ties after two rounds.

Slicing the field by half puts added stress on the touring pros, because the economics of the tournament system are brutally efficient–don’t make the cut, don’t make the money.

Jackie Stoelting, Olafia Kristinsdottir, and Simin Feng had each made only four cuts in the 2017 season as they began their second round at the 2017 ShopRite LPGA Classic presented by Acer. Each golfer must have felt the pressure to make the cut for the third and final round on Sunday. 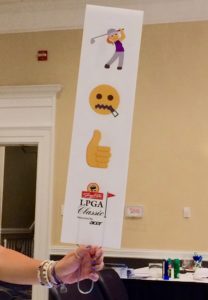 Emojis are now the universal language

Feng was in pretty good shape at 4-under, tied for 9th as the second round began at 12:15 p.m. at the tenth hole. However, Kristinsdottir was just beyond the cut at 2-over, while Stoelting was right on the line at 1-over.

The Bay Course’s short par-4 may have calmed their nerves a bit, as Kristinsdottir made birdie and the other two made routine pars.

However, the high fescue rough nearly surrounding the par-3 11th green caught their immediate attention. The hole was set 4 yards from the back edge and 6 yards from the right side. Feng and Kristinsdottir’s tee shots landed in the middle of the green and scooted into the high stuff beyond. Stoelting’s tee shot landed in fescue just short of the green, but bounced softly to the fringe, 35 feet or so from the hole.

The two fescue-bound golfers took unplayable lie relief, with Kristinsdottir making bogey and Feng making double. Stoelting made things more interesting than she wanted with a first putt that rolled 9 feet past, but she recovered for a good par save.

Meanwhile Stoelting kept making pars, with her first bogey coming on the 17th with a nasty short lip out on a short putt. All three golfers made nice birdies on the par-5 18th, lightening the mood a bit, followed by three pars on hole number 1, their tenth of the day.

Then it was Stoelting’s turn for some trouble on the long par-4 second hole. Sitting 131 yards out after an unsatisfactory drive drifted into the right rough, the wind blew down range and the hole sat 7 yards from the back and 4 yards from the left edge. She hit a pitching wedge because of the risk of going long into the marsh beyond. Stoelting’s shot stopped a few yards short of the green, but after a good chip watched her putt for par bounce off line.

Feng made birdies on 3 and 5 and pars on 4 and 6, while the other two parred all four holes. By then, however, only three holes remained to improve their chances.

The seventh hole, a long par-3 with the hole set far back and to the right, knocked Kristinsdottir out of the running. A good drive was followed by a bad first putt, leaving her with a ten-footer for par that she couldn’t convert. She fell further back when her second shot on the short par-4 8th ran off the back of the green, leading to another bogey.

Meanwhile, Stoelting also bogeyed the 7th, when her chip shot came up well short and she failed to make the 15-footer. At that point she was 3-over.

On the 8th hole, Stoelting’s approach shot fell into the right front bunker, and her blast from there went 12 feet past the hole. She then made one of her best putts of the day, saving par and her chance to make the cut.

Hitting into the wind on the par-5 ninth, Stoelting and Feng laid up for safe third shots into the green. Kristinsdottir blasted her second shot to the left rough about hole high, and made birdie. Her 5-over total wasn’t good enough, but that birdie brought a smile to her face.

Feng finished where she started, 4-under and in position to contend for a high finish the next day. Stoelting’s par putt from one foot kept her at 3-over, tied with 9 others at the cut line. “I’ll take it,” she said. “I pride myself for fighting, staying in there, especially on that putt on 8, [it] was really big.”