Being in the first group on the first hole of the opening round of a professional golf tournament has its benefits. 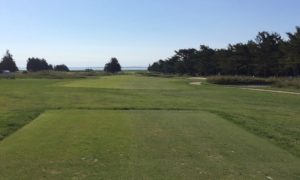 The 359-yard par 4 first hole at The Bay Course at Stockton Seaview, site of the ShopRite LPGA Classic presented by Acer

The fairways and greens on the first nine holes are immaculate. Other groups start on the 10th hole at the same time, so only nine groups played ahead of you for the 10th through 18th holes. That’s still pristine compared to what others have to contend with in the afternoon.

And at that point in the tournament, without regard to the money list or any other rankings, you are first among equals.

During the 2017 ShopRite LPGA Classic presented by Acer, I watched three women test their talents with a 7:15 a.m. start on the first tee of the first of three rounds at the 6,217 yard Bay Course at Stockton Seaview Hotel & Golf Club.

Jackie Stoelting reached the LPGA ranks for 2017 by finishing in third place on the 2016 Symetra Tour. She is a former Big Break winner on The Golf Channel, and won a car during a Symetra tournament last year.

Olafia Kristensdottir is the first LPGA player from Iceland. The rookie graduated from Wake Forest and played on the Ladies European Tour before coming in second in the LPGA’s 2016 Q-School.

Simin Feng is Chinese, and now lives in Florida. She finished 79th on the 2016 LPGA money list, her third year on the tour.

Each had made four cuts for the season before the ShopRite.

The weather was gorgeous, sunny with just enough of a breeze to keep the bugs away. The three women started off well, with pars on the first hole, but the long par-4 second hole led to bogeys for Feng and Stoelting.

The variable scoring continued until the uphill par-3 15th hole. That was the only other hole during the round where all three players made the same score.

Feng and Kristensdottir often drove their tee shots well past Stoelting on the par 4s and 5s, but Stoelting usually kept pace regardless.

Feng overcame two bogeys with six birdies, including a run on the 7th through the 9th and two more in a row on 17 and 18. When the first day finished, she was tied for 9th place.

Kristensdottir’s round was almost a mirror image of Feng’s, with four bogeys and two birdies. Most of her troubles came on the challenging greens, with at least four lip-outs. Her 2-over score eventually put her in a tie for 79th, projected to miss the cut.

Stoelting’s one-over round included ten pars, four bogeys, and three birdies. She also had a few challenges when putting. A sharp pull back with her putter as she left the green after missing a five-footer for birdie on the 18th hole let the others know how she really felt. She stood in a tie for 64th late Friday, right at the cut line.

Playing in the morning’s first group also means not being swamped with fans. Most of them show up on the course by around lunchtime or later.

Thomas Bojanowski, Kirstendottir’s fiance, walked with the group. The two met at Wake Forest, where she played golf and he ran for the track team. The wedding date isn’t set yet. Bojanowski noted that while many LPGA seem to tie the knot in December, there are only a few hours of sunlight on an Iceland December day.

Stoelting’s parents, Ed and Teri Barenborg, drove up from Florida with a travel trailer to watch their daughter play. He and I had a nice chat about the Cape May Lewis Ferry, which they used on the way to Seaview. Ed is an accountant, and told me that going up the Delmarva Peninsula saved a bunch in tolls compared to other routes to South Jersey–word to the wise. Teri has been a high school golf coach, and was pleased to learn that Delaware girls finished first and second in this year’s state championship.

Lee Feng is Simin’s father, and was a quiet presence during the round. Carrying a folding stool, he usually walked well ahead of the group, the better to watch his daughter’s approach shots to the green.

Other than family members, soon to be family members, and yours truly, that was about it for this group’s entourage. Large, slow-moving clusters of fans followed well-known golfers such as Michelle Wie around the course later that day.

There are three sets of viewing stands at the ShopRite, at the 1st, 17th, and 18th holes.  For the early morning starters these places are, shall we say, not filled with fans.

In other words, first off on the first day usually means a pretty quiet round. For these players, therefore, positive feedback during their round must come mainly from within.