Sykes family working together at Out of the Sand

If you’re looking for the Sykes family, your best bet is to stop by their new Out of the Sand recreation outlet at the Midway Shopping Center.

Scott, his wife Tanya, and daughter Savannah are busy with the sports simulator business, which features three spacious booths for their customers. Each playing space is outfitted with a large display screen to watch the simulated ball flights, a touch screen computer monitor, high-speed cameras, and special lighting units to create a useful play and practice location for golfers and other sports.

“Savannah came up with the idea of naming each bay after a real one,” Scot said in a recent interview. “My wife and I named them after bays that were important in our lives.”

For example, the Mission Bay booth is named for the San Diego lagoon. A 1996 Cape Henlopen High grad, Scott joined the Navy and spent part of his time in the service at the naval base there. The local inspiration for the Chesapeake Bay booth is pretty obvious, and the family also has a personal connection to the last booth’s name, Kaneohe Bay.

After his Navy stint, Sykes worked for Pacific Bell out west. He eventually returned to the Cape Region, where he now serves as a warranty supervisor for a major homebuilder. He also earned an associates’ degree from Delaware Technical Community College and his bachelor’s degree from Wilmington University.

Sykes had chatted with other veteran friends about the popularity of golf simulators in Korea, and did his research months before taking on the lease at Midway Shopping Center last October. “I looked at three different simulator companies, Full Swing, Visual Sports, and Sports Coach. I picked Sports Coach because they offer simulator sports in addition to golf, and the system is camera-based. The cameras are supposed to be more accurate than sensors, and they pick up the motion of the ball right at the swing,” he said. Sykes also visited with simulator operations in San Diego, the Outer Banks, and Albany, NY.

Players sign up for specific time slots. For golf they can play one of the 40 courses available in the system or try one of several practice range options. The Kaneohe booth is also set up for the other simulator sports.

Recently Sykes started the company’s first golf league. Twelve golfers meet on Tuesday evenings to play better ball ball of partner matches for six weeks. League play is at a reduced rate, with a small sum tacked on for the winnings at the end of the season. Sykes is also planning to start a Sunday afternoon league “once the football season is over,” he said.

The first Out of the Sand golf tournament will take place Feb. 10 and 11, using a nine-hole format. The entry fee is $25 and the top prize is five hours of free playtime.

Thus far the local reaction to the new sports business has been “promising,” Sykes said. “Everybody that’s come in has been great. We’ve gotten a lot of good feedback.”

Find a charm for what ails you

While on vacation last spring, my wife and I saw a large display of Pinocchio memorabilia at the airport while waiting for our flight back home. I looked over what was offered, and at her urging I gladly picked out a Pinocchio key ring. 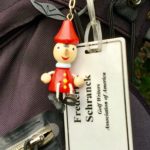 A photo of this item accompanies this column. As you can see, this little doll now has a place on honor on the side of my golf bag.

A major playing challenge for many years has been my inability to keep my legs consistently stable throughout the entire swing. If my legs sway, bringing the golf club back to the intended position on the downswing is far more a matter of chance than it should be. If my timing is perfect, swinging on wobbly legs won’t necessarily hurt, but that just doesn’t happen except on very rare occasions. Many of my mishits can be traced to just this one issue.

However, looking over at my golf bag at Pinocchio, with his legs made of string, reminds me to keep my own legs from swaying back and forth.

The thing works like a charm, as it were.

You might find it useful to consider what part of your golf swing could use a similar visible reminder, whether it’s from a string-legged puppet or something else. I know I am not the only golfer out there with an occasional case of Pinocchio legs, and there have to be some other charms that could help folks with other swing faults.

You just have to use your imagination.