Pat Mastrian said his first love was basketball, but at a relatively young age he figured out that he could make a living at golf instead. 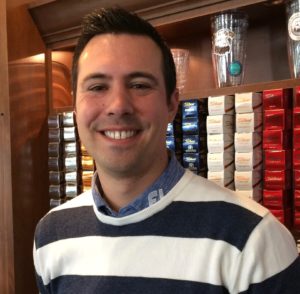 With that one anecdote, the head golf pro at Rehoboth Beach Country Club showed he has a level head on his shoulders.

Mastrian, 29, is from Hermitage, PA, near the Ohio border and the city of Youngstown. He started playing golf at age 6 at what he described as “the world’s only free golf course, it’s called Buhl Farm. We called it Dum Dum. I was with my dad. We’d hit balls and go out and play.”

From there Mastrian started going to Saturday morning golf clinics at Tam O’Shanter, “the course I kind of grew up playing.”

While in a junior tournament in Pittsburgh as a freshman in high school, it dawned on Mastrian that a golf career was a possibility. A college recruiter from Methodist University in North Carolina chatted with his dad while following Mastrian. He and his father started researching schools for golf management. Mastrian eventually enrolled at Penn State, majoring in recreation park tourism management with a “focus in PGA golf management. I also minored in business.”

The golf management program included more than the usual collection of college credits. It also required extensive internships, usually during every college summer. For Mastrian’s first stint, he moved in with his aunt in Parma, OH and worked at the famous Canterbury Country Club near Cleveland, the site of several major championships.

Mastrian was supposed to complete a seven-month internship that first time, but he didn’t want to miss Penn State football. He managed to land an in-school internship that met the requirements at the university’s new indoor golf teaching center. He was the facility’s first-ever intern. “I learned an awful lot about the golf swing there,” Mastrian said.

For his second internship, Mastrian worked at Congressional Country Club in Bethesda, MD. That’s when he met Charlie Schuyler, Congressional’s first assistant golf pro. It was the start of a great professional relationship.

Schuyler left Congressional in 2010 to take over as head golf pro at RBCC. Mastrian followed him to Rehoboth the next summer for his final three-month internship. At the end of that interval, Mastrian met all the requirements for his bachelor’s degree, and was also hired by the club as an assistant pro.

Mastrian completed his Playing Ability Test in 2007 on the first try. “As soon as I graduated I was able to apply for my PGA membership, and got it in 2012. I did all my PGA work while I was in school,” he said.

After Schuyler left RBCC, Mastrian formally assumed the head pro position in December 2016. “I’m fortunate that I was able to come here with Charlie and learn from someone who’s obviously excelling in the industry. [With] him going to Augusta [National] he was able to come back and teach me some very important things from his time there.”

Mastrian plays about 20 rounds per year. “I try to get out and play with the members as much as possible. We’re going to try to make it more of a priority,” Mastrian said. The challenge is to find that time while also being as responsive as possible in the demanding world of emails and cell phones, while also running tournaments and the pro shop.

Mastrian usually gives between 50 and 60 lessons a year, many of which are part of package lesson deals such as six lessons for the price of five. Each assistant pro typically provides a similar number of lessons.

His approach to teaching is based in part on his certified training with the Titleist Performance Institute. Mastrian also focuses on “the body and the movements that the body can do. Everyone can do different things with their body” such as different swing speeds or flexibility.

“You have to tailor the swings to what they can do and not necessarily teach one swing type,” he said. “I work with the person’s skill level and their mobility. Unfortunately, golf isn’t instant gratification. Sometimes you have to take two steps back in your game to take four steps forward.”

He also stressed the need to find out which teaching method will work with each student. “Some are far more visual and for others it’s based on feel. There are different ways, whether it is video or a launch monitor. The key is not to overload the students. For me, I focus on path and face angle.”

Mastrian enjoys the club culture at RBCC. “What I like is the friendliness of the membership, the beach feel of the club, and just the relationships that you’re able to build with the membership. It just makes the job that much better.”

Switching from basketball to golf turned out to be a great idea.