Dane Palmer won medalist honors in what Viking head golf coach Chris Krueger called “another solid performance.” Nolan Brown shook off a bit of a shaky start to his round and came in second for Cape with his 41.

Saxon Kalb finished in the third spot for his team with a 47, while Michael Bollig added his 48 to contribute to the total.

Cape continued its string of victories with a 166-199 victory over Dover High’s Senators at RBCC May 1.

Brown hit a few trees along the way but still managed to shoot one over par for medalist honors. “I putted pretty well, burned a bunch of edges,” he said.

Palmer shot a 40 for second place among the Vikings. “The wind seemed to switch on every hole. The course was playing really short today,” he said. 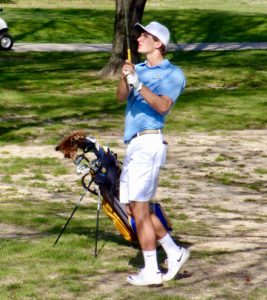 Dane Palmer made a good recovery from the trees right of the 7th fairway at Rehoboth Beach Country Club during the May 1 match against Dover High.

Kalb kept his third position with a 44, while Bollig and Ben Skelley tied for fourth best for Cape with 45s. Skelley said, “I couldn’t get the ball in the air with my irons. I don’t know how I shot 45.” Bollig said his 45 included two triple bogeys, but he also made a nice sandy par on the seventh hole.

Only four matches remain before the Conference championship. If the team continues its winning ways, the Vikings will certainly qualify for the State Championship at the end of May.

At the seventh tee during a recent round, I joined three very pleasant women who had been playing in front on me.

I quickly learned one reason they were so pleasant.

With a good drive and an even better approach shot, one golfer watched her first putt dive into the hole.

They gathered around one of the golf bags as one of them pulled out a small flask of Fireball. Not quite a shot’s worth of the cinnamon-flavored whiskey went into each of four small paper cups.

They graciously offered me a cup, but I declined the honor and suggested the birdie maker take my share. She did.

I then learned this was the group’s third birdie of the day, which certainly explained their sunny attitude during the round—warmly assisted by their special way of celebrating.

The Bluesuiters Golf Tournament on May 17 at Jonathan’s Landing Golf Course is a unique way to connect with the service members at the Dover Air Force Base.

Sponsored by Johnny Janosik Charity Events, the format slots two DAFB members with two community members for each foursome.  Registration begins at 10:00 a.m. with a shotgun start at 11:00 a.m.

The entry fee of $70 covers the range, the round of golf, prizes, and a post-round dinner. To sponsor an Airman’s round, or donate a door prize, or for more information, contact Cristal Brenneman at the Central Delaware Chamber of Commerce at 302-734-7513 or cbrenneman@cdcc.net.

The Horsey Family Youth Foundation Celebrity Golf Classic takes place May 23 and 24 at the Heritage Shores Golf and Country Club in Bridgeville.

The two-day event supports the Foundation and begins with a Wednesday evening gathering at 5:30, meeting and greeting Philadelphia Eagle Hollis Thomas and New England Patriot Tony Collins and other celebrities. After dinner, a silent auction will be selling sports memorabilia, jewelry, trips, and other temptations.

The golf tournament takes place the next day in a team-based competition, and playing spots are still available.

More players are also being sought to fill out the remaining slots for The Children’s Beach House charity golf event, held May 24 at The Peninsula on the Indian River Bay. The scramble format tournament begins with the range opening at 10:30 a.m. and a shotgun start at 12:30 p.m., followed by a poolside dinner buffet.

The Mulligans Pointe Ladies Day game for May 1 was Fewest Putts. Carol Love won first place, with Pat Short in second and Retta Rose in third.

The Rookery Women’s Match Play Team split their May 1 away game against the women of Mulllgan’s Pointe. The Rookery group won the Gross contest 45.5 to 34. Mulligan’s Pointe won the Net contest, however, 38 to 26.5.