This year’s trip with the Conlon brothers and several other golf buddies visited three good courses in the Pinehurst NC area.

We began at The Legacy Golf Links in Aberdeen, NC, a longtime favorite (800-344-8825). This par-72 Nicklaus design was refurbished in 2012, and now features Mini Verde greens that were great shape and a fun challenge.

We played in a steady drizzle with temperatures in the high 50s. The rain wasn’t enough to stop us playing, but it did force us to follow cart-path-only rules for the round. While necessary to protect the turf, especially in hilly conditions, that limitation definitely adds to playing time.

The long winter we experienced in the Cape Region also had its effect on the Carolina Sandhills. One course we previously lined up was taken out of rotation because of the cold weather of the last several months. Instead, we played the Seven Lakes Golf Club in Seven Lakes, NC for our second and fourth rounds of the trip (910-673-4653).

For the first round at Seven Lakes we played once again in drizzly conditions, with cart-path-only limits, and with winds that varied from light to one-club levels. Peter Tufts III, godson of legendary course designer Donald Ross, laid out Seven Lakes in the early 1970s and the hilly course was in good condition.

Of the many courses I’ve played in the Pinehurst area, this design looks the most like a traditional private country club layout. The club currently offers breakfast and lunch and two drinks as part of the playing package, which added to the private club-like ambience.

The greens at Seven Lakes were in fine shape, if a bit hard. Despite days of rain and drizzle, several shots from our group bounced off the small greens into rough or bunkers beyond. For several holes the greens also sloped slightly downhill from front to back, making approach shots less forgiving than if the slopes ran in the usual alignment.

Conditions were much improved for the second round at Seven Lakes, when we enjoyed partly cloudy skies and warmer temperatures. Playing it a second time helped some of us make better tactical choices. Being able to drive the carts in the fairways (not par 3s, of course) also helped a lot. The greens were still a firm but fair challenge, however.

Between the two rounds at Seven Lakes we revisited The New Course at Talamore, in Southern Pines, NC (800-552-6292). It had been years since I played this course, and frankly hadn’t remembered much of it other than the 18thhole.

First opened up in 1991, the Rees Jones design underwent a recent major renovation. The greens were restored to the larger dimensions Jones first laid out, and with 75% of the golf courses’ original bunkers removed. The renovators installed Champion Bermuda grass greens, surrounded with 5-foot wide Tif Eagle Bermuda green collars. They looked and played great.  I won the day’s putting contest with a 46-footer on the last hole, so my perception may be a little biased. 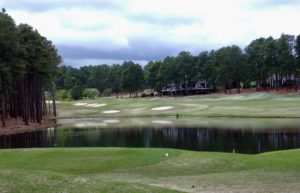 The 18th hole at The New Course at Talamore Golf Resort

These trips are not just about playing golf, naturally. It’s also important to experience other golf-related attractions when you can. Several of us had a very pleasant dinner at the Drum & Quill, a traditional pub in the heart of Pinehurst’s Village (910-295-3193).

Kevin Drum is the son of legendary Pittsburgh sportswriter Bob Drum, whose writings helped propel Arnold Palmer to world prominence. He is also a friend of mine from past Golf Writers’ tournaments, and we have had great conversations whenever we have been in the same foursome.

As he said, the Drum & Quill may be the only tavern celebrating the work of golf writers, so it made perfect sense for me to bring my friends there. Drum stopped by and visited with us for a bit, which was both unnecessary and very nice of him.

The Cape Henlopen High School golf team defeated the Smyna Eagles at Garrisons Lake May 3, 178-207, for their tenth victory of the season. Nolan Brown won medalist honors with his 5 over par 41. Saxon Kalb’s 44 earned him the second spot for the Vikings.

Dane Palmer contributed a 46 and Michael Bollig completed the team scoring with his 47.

The Vikings suffered a close defeat to Sussex Tech May 7 at Heritage Shores, 172-174, their second loss of the season. Brady Lingo won medalist honors for Tech with his 41, while Palmer’s 42 was the best that Cape could do.

Brown and Kalb both shot 43 and Ben Skelley’s 46 finished the team total.

DWGA Bash to the Beach

Eighty women competed in the Delaware Women’s Golf Association’s spring Bash to the Beach. The two-round better ball of two tournament took place at Ocean City Golf Club May 6 and at Bear Trap Dunes May 7.