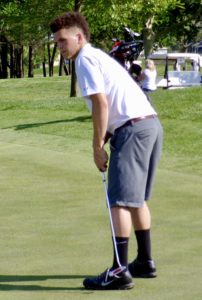 Brandon Mays-Harp putting on the third hole during the May 18 match against Woodbridge.

Nolan Brown and Saxon Kalb shared medalist honors with a pair of 41s. Brown was even par for his first five holes. Kalb said, “Everything’s starting to click now.”

Two triple bogeys marred Dane Palmer’s round as he finished with a 47. Brandon Mays-Harp and Reed Jones both shot 48 for the final Viking score for the match.

At the 2018 PGA Merchandise Show in Orlando, FL I met Jim Katz, the Marketing Communications Manager for Bollé sunglasses. The company makes a variety of sport-specific eyewear, including marine, biking, and golf lines.

“We honestly believe we have the best golf sunglasses out there,” Katz said.

For golfers, most of Bollé’s options are wrap-arounds, in either a rimless or semi-rimless frame. Katz said the 2018 lines use the company’s Trivex lenses. This material is claimed to be superior to the polycarbonate material used for most sunglass lenses.

Katz said it is lighter, more shatter-resistant, and provides better clarity. In addition, the lenses are photochromatic, meaning that the lenses change color to accommodate ambient lighting conditions from broad daylight to shade. Katz said the Trivex lenses transition quickly in colder temperatures than other materials.

Katz said their golf lenses are amber colored because that tint works best in highlighting any changes in a green landscape. I used a sample pair while playing in North Carolina and around here, and the clarity and color distinctions are dramatic.

I was also impressed with the eyewear’s highly adjustable nose pads. Katz demonstrated the fitting process by closing the two ends together and then sliding them down his nose. The pads won’t move unless the wearer makes them do it, a better alternative to pushing the glasses back in place during a hot round.

The Bolt line is the most popular for golfers, retailing for $149. The upscale models are called Sixth Sense and retail for $189. Katz said the 2018 line also includes designs for golf that are more traditional than the swept-back type, making them a good option for off-course wear. The King/Anaconda models retail for $120.

The sessions run an hour each and are scheduled for June 18 and 25 and July 2 and 9. Deas emphasizes the grip, putting, chipping, and other fundamentals.

The Rehoboth Beach CC Ladies 9-Hole opening day tournament on May 15 was a step-aside scramble.

The Mulligans Pointe Ladies golf group played a low gross/low net game May 15. Three players tied at 90 gross, so on a match of cards first place went to Brenda Lewes, second to Sue Ahem, and third to Maxine Ansbach.

The Kings Creek CC Ladies 9-Hole group played a Cross Country game May 9 using five scores of the nine played. The better net scores for either the first or ninth holes, second or eighth holes, third or seventh holes, fourth or sixth holes, and the fifth hole scores are used to rank the players.

Mary Beth Merolla won first place, with Rita Musi in second and Bernie Reid in third. Reid also won closest to the pin on the 8thhole.

Jeannine Doane and Faye Slatcher tied for first place in the second flight, with Shery Pie in third. Sheree Mixell and Nancy Froome tied for fourth.