A whole lotta golf for a good cause

Anita Pettitt’s grandson Aidan was three years old when he was diagnosed with juvenile diabetes. “Grammy,” as he calls her, decided to do something about it.

Pettitt is an avid golfer. She convinced two golfing buddies to join her in playing a lot of golf in a single day for the benefit of the Juvenile Diabetes Research Foundation. 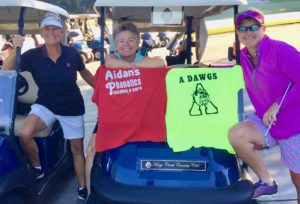 Pettit and her partners usually play during the July 4 holiday period, so they keep squirt guns are in their bags to stay cool. They also chip in $5 for any double bogey or worse. Although they are fast golfers, with average scores in the low 80s, it still takes about 12 hours to finish.

They’ve been doing this for over 10 years. Last year they raised over $4,000 for the JDRF.

This year’s round took place July 9 at Kings Creek Country Club. Pettitt said, “I am exhausted, feeling my age, but grateful that I am still able to do it.”

“We had lots of laughs, plenty of deer as our gallery, and so far have raised $2000,” she said. More pledges are expected.

If you would like to help this worthy cause, go to the donation page at www2.jdrf.org/goto/aidenwellsgolfmarathon.

When you don’t want to be on the golf course

The Cape Region’s summer weather is unpredictable. With the buildup of heat and humidity during a typical July or August day, the threat of sudden thunderstorms is pretty common – but it’s hard to say where or when the lightning and thunder will make an appearance.

Golf course operators must deal with the risk of injury from these storms as a routine part of their business. That’s why it’s not uncommon to walk into Cape Region pro shops and see at least one TV screen tuned into The Weather Channel or some other weather radar. The clubs also implement storm protocols to close down the course or otherwise take steps to help golfers avoid weather-related injuries or death.

During the 2018 PGA Merchandise Show in Orlando, FL I interviewed Robert Dugan, President of ThorGuard. The company sells a variety of integrated lightning prediction and warning systems for all kinds of outdoor-related entities, with golf courses and tournament operators a large part of their customer base.

Dugan was careful to highlight the word “prediction” when talking about what his systems provide, as opposed to the word “detection.” “We’re the only lightning prediction system out there,” he said.

Once installed, the devices can predict lightning strikes from as far as 15 miles away. “We look at the micro-climate measured at the site,” he said. Thorguard’s predictive technology is based on measuring the build-up of electrical energy within the geographic coverage area. Dugan said, “Think of it as a very smart volt meter.”

We talked about the different kinds of lightning, such as cloud-to-ground, ground-to-cloud, and cloud-to-cloud. Dugan said lightning “needs the ground component” to damage the golf course or the golfers. He also said cloud-to-cloud lightning can cause false alarms and unnecessary closures for operators that rely solely on lightning detection systems, and that his company’s products focus instead on the actual lightning risks involving the ground.

The company offers mobile and fixed services installed in place, such as the Voice of Thor horn systems. The software can be downloaded to smart phones and personal computers, complete with live radar imagery and the company’s red alert warnings.

I was impressed by another company offering in cooperation with Visage Mobile Golf Information Systems, a touch screen and GPS service installed in Club Car golf carts. The software sends warnings of dangerous weather conditions to the cart users that appear on the Visage screens. To keep operating the cart, the driver must acknowledge the signal. The Visage systems preserve the data that shows when the signals went out to the carts, as well as the acknowledgement responses made by the cart users.

That kind of record keeping could come in handy if something bad happens and someone later decides to sue. “Can’t say we didn’t warn you,” indeed.