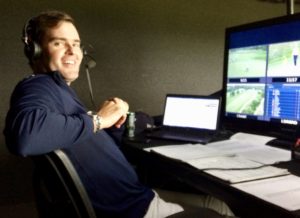 Tom Abbott of The Golf Channel

Tom Abbott’s path to his current broadcast career with The Golf Channel had some interesting twists, and he’s fine with that.

The Wallington, England native played junior golf at a competitive level, but he admitted in a recent interview that several friends surpassed his own skills on the links.

Nonetheless, a chance meeting led to a golf scholarship to Mercer University in Macon, GA. He majored in Media and Business and graduated in 2004. From there he landed his first ever sports broadcasting job in 2005, at a CBS affiliate station in Charlottesville, VA. The TV connection runs in his family. His mother is a freelance technical director for the BBC.

Abbott admitted to being a bit of a fish out of water for the Virginia job, focused as it was on American sports such as basketball and baseball. He said it was good training, however, especially when an opening came up later that year to help with what was then called Golf Channel UK. They needed an in-studio host to assist in the broadcast of European Tour events. Abbott fit right in. That lasted until the end of 2007 when the UK division “ceased to exist,” as Abbott described it.

His next TGC stint was to help with its U.S. broadcasts of the European Tour, using the live world feed that came into the Orlando studio. He said time zone differentials presented a real challenge, with tournaments taking place all over the world while he sat in a booth in Florida.

Abbott’s work with LPGA Tour coverage began with a few events in 2009, which expanded the next year with the new contract between TGC and the Tour. Since then he has also helped NBC Sports with coverage of the Ryder Cup, Solheim Cup, and the PGA Tour.

His current work keeps him out on tour for much of the year. On the other hand, it also provides Abbott with opportunities to maintain his 4.0 handicap index (3.5 in England) on golf courses at or near LPGA tournament sites.

After the Friday broadcast for the 2018 ShopRite Classic presented by Acer, for example, Abbott was to join seven other Golf Channel players for a round at highly rated Galloway National. “I’m fortunate to be able to play these great courses, depending on the broadcast schedule,” he said. He also spoke well of his TGC teammates, such as Jerry Foltz, Grant Boone, Karen Stupples, and Terry Gannon. He said that Kay Cockerill “is a great ambassador for the game.”

A typical tournament week begins with Abbott touring the course on Tuesday or Wednesday. After a production meeting, they begin doing preview bits and voiceovers for insertion during the broadcast. Abbott also reads through his collection of player interview transcripts and makes notes for use during show intervals, focused on the players who will likely be in contention.

Abbott returns to the golf course three to four hours before the broadcasts, and limits his drink selections to either water or sparkling water. He also said he limits his food intake well before going on air, which makes perfect sense. 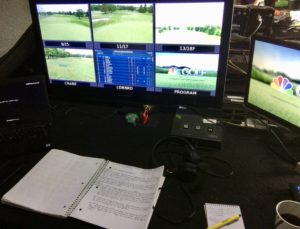 For play-by-play work he often handles the action on the odd-numbered holes, while Grant Boone does the even-numbered ones. Abbott sits in front of a bank of TV monitors and goes from player to player as the action warrants and the producer calls in on the headset.

Abbott also stressed that “knowing when not to say anything” is as important as what is said. “This crew just knows.”

The broadcast team for a typical LPGA broadcast is about 100, including about 15 volunteers who walk with the player groups and call in what is going on to the producers. The TV window usually focuses on “four to five groups regularly,” he said, but the volunteers often present opportunities to show other golfers when something special occurs.

Abbott often works with Hall of Famer Judy Rankin on the LPGA broadcasts. “She’s just great. She’s very sharp, and passionate about the Tour. She uses an economy of words to make her points, and she’s very good at what she does. Judy’s also a great sounding board, and she’s been very supportive of me,” he said, showing me an “attaboy” text she sent him during a recent event.

Abbott also gave his perspective on the difference between regular tournaments and the majors. “The majors are on a grander scale. There’s obviously more importance, and there are more hours for coverage. There’s a level of excitement and focus and concentration with them,” he said.

The touring requirements for TGC broadcasters mirror that of the players, which means Abbott doesn’t often see his Orlando home for more than a day or so between the weekly trips. The fall schedule, dominated by the limited field overseas IMG broadcasts, doesn’t require as much of his time. He’s back at it for the season-ending CME Group Tour Championship in Naples, FL in mid-November, and then there’s some downtime before the start of the next LPGA season.

Keeping to that kind of work schedule isn’t for everybody. It certainly seems to agree with this affable Englishman.