Originally scheduled for two 18-hole rounds, the second round was formally shortened to the golf course’s front 9 when severe thunderstorms swept through the area.

John Pipitone of Bear Trap Dunes was the best finisher among Cape Region men, in a tie for sixth place behind the winner, Gary Dornhoefer of Wild Quail Golf & Country Club.

The tournaments run by the American Junior Golf Association are the major leagues for highly skilled junior players.

The long-running organization attracts some of the best young golfing talent from all over the world to its events, along with college recruiters on the lookout for potential student athletes. Jordan Spieth is a classic example.

This year the AJGA ran its first-ever tournament in Delaware, at DuPont Country Club in Wilmington, from Aug. 5-8. The first 18 holes were used as the qualifier. Golfers could play that round to earn participation credits for eventual tournament play elsewhere, or to fill one of the limited spots remaining for the three-round tournament that followed.

For the DuPont event, whose lead sponsor was Imperial Headwear, only 3 such spots remained for the girls, while 11 spots were possible for the boys.

I followed Brockstedt during the hot and steamy Monday morning qualifier, beginning at the uphill par-3 13thhole. After a promising par, she stumbled a bit with two straight bogeys. Brockstedt recovered with more pars, but more bogeys and two unfortunate double bogeys marred her scorecard as she finished with an 82, tied for 15th.

Her mother Kelly told me they had just returned home the day before from a multi-round tournament in Pinehurst, NC, so from my perspective Brockstedt was simply tired. Sawyer also knew she was only playing the qualifier as a credit for future events, so perhaps that affected her play. 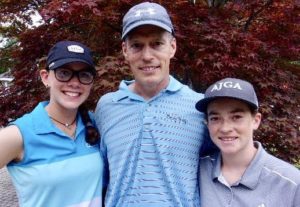 Sarah Lydic also had some troubles in the qualifier, including two uncharacteristic double bogeys. Her 79 put her in a tie for ninth place.

The next day I followed Hannah Lydic during her first round of the formal tournament. She drove very well, but too many approach shots either bounced over the green or came up a bit short. Putting was also a challenge for her on the fast, sloping greens.

The tournament was well run, with what appeared to be at least a dozen AJGA staffers and several helpful volunteers. I could see why the organization has the reputation it enjoys.

The new owners of DuPont CC should be congratulated for promoting high-level junior golf in Delaware with their new affiliation with AJGA.

Golfers can register as singles or in groups with the $75 per person entry fee for the 11:30 a.m. shotgun start at Mulligan’s Pointe Golf Club near Georgetown. Fee discounts are available for first responders, educators, and veterans.

The fee covers the golf, a boxed lunch, complimentary drinks and snacks, on-course games and activities, and prizes. Hole-in-one contest chances include a Jeep, a trip, and an electronic package.

Registrations can be made online at Sussexoptimist.org or by contacting Dave Hartman at dave.hartman@hvacrsales.co.