For those inclined to be hot-tempered, golf is perhaps not the best choice of game to play.

For others, golf provides many moments that test their equanimity, or at least their ready acceptance of life’s vicissitudes.

I observed a good example of the right attitude during the 2019 ShopRite LPGA Classic presented by Acer.

LPGA player Kendall Dye returned to that tour this season after a successful stint on the 2018 Symetra Tour. A good finish at the ShopRite and later tournaments would go a long way toward maintaining her status.

I watched Dye’s steady play that morning, so I fully expected her next shot to snuggle in close to the hole on the back third of the green. However, her downswing produced a small cloud of dirt spray, with the ball landing about 25 yards short of the green.

Dye’s chip shot finished seven feet short of the hole, which was understandable. This green slopes front to back and encourages caution. She rolled her par putt a foot past the hole and finished with a bogey.

There was no sign of temper. Instead, she recovered nicely with a birdie on the second hole, a long par 4, and made another birdie on the short par 5 third.

Dye finished the round at two-under, and we chatted about that odd second shot on the first.

“I was in a pile of sand. It’s just golf. I hit one of my better tee shots the whole day, and it ends up in a huge sand divot. So I tried to just punch it out of there and it came up heavy. I hit a good chip shot and then my putt was right where I wanted it but hit a spike mark. So there’s two unfortunate things that are out of my control. But when those things happen, you’ve just got to think that the golf course is going to pay you back in the future,” she said.

Dye made the cut but struggled in high winds during the final round. She finished in a tie for 71st, making $3,465. 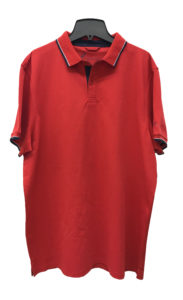 One of the new Fieldston polo styles

Going to the PGA Merchandise Show every year means you see hundreds of booths of the same businesses. I also look forward to checking out some first-timers, so I dropped by the new Fieldston Men’s Sportwear booth.

Christina Vanderhoff is the vice-president of S. Rothschild & Co. in New York City, which has been in the clothing business since 1881. It handles outerwear brands such as French Connection and Via Spiga. In 2017 Rothschild created the Sam Edelman line of active and athleisure clothes for women.

The polo shirts come in three basic blends: 100% polyester performance fabric, with now-typical wicking properties; a retro pique option, half cotton and half polyester; and a textured polo that is 85% polyester and 15% spandex. Volley and walk shorts are also are polyester/spandex blends.

I could see several of these items selling very nicely at the men’s specialty shops in Rehoboth. 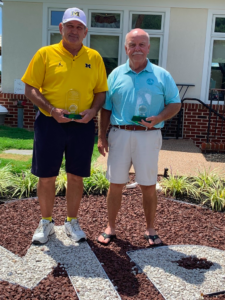