Mind The Gap: A fitting way to improve your golf game (part 5)

By this time of the Cape Region golf season, most local players know quite a bit about their game.

September and early October are often when they play their best. The weather’s usually great, and their swing is as grooved and predictable as ever.

That is why now is a great time to figure out which clubs should be replaced, and in the process work with your local golf pro or club fitters to find your new clubs.

Take a look at the average carry distances of your clubs, from drivers through fairway woods and on down through your irons to your wedges. Doing this review, whether on the range or during a few decent rounds, will also give you the chance to Mind the Gap.

The “gap” is your average distance between clubs. For long hitters, such as PGA Tour pros, this can be 12-15 yards. For most everybody else, it is more likely about 9-10 yards.

However, for many amateur golfers there are places in their bag where the usual carry differences are far less than the 10-yard standard. Based on my conversations with club pros and club fitters, this often happens with lower-lofted irons such as 4- or 5- irons, but it can also occur with wedges.

A good session with a pro or a fitter can identify these gaps and help you decide your best option to improve them. It is a common practice among those who play the game at a high level, but can pay even bigger dividends for higher handicappers.

For example, last spring I talked with veteran LPGA Tour golfer Ayako Uehara, along with her caddie, Bob Kendall. Kendall is a Minnesotan and a Phillies fan, and helped with the slight language barrier between his Japanese boss and me. He said he’s been with Uehara since 2017, but that he’s “still on probation.” 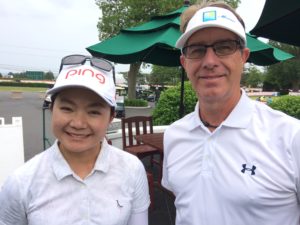 She laughed at Kendall’s remark, so I did.

Uehara is not a long hitter. Her longevity on tour is due to the quality of her swing and her tactics on the course. You won’t see her try to hit a green in two on a par 5, but her short game is impressive, as are her recovery skills from rare mistakes.

Last winter Uehara received a complete fresh batch of clubs from Ping during a stop in Japan. She returned to Ping HQ in Arizona in early spring for a tweak or two after playing the Japan Open as well as LPGA events in Australia and Thailand.

When we met near the clubhouse at Seaview Resort during the ShopRite LPGA Classic presented by Acer, she was fully dialed into her new equipment, and as you might expect, she and her caddie know her gaps.

Uehara uses a Ping 410 Plus driver, fitted with a light Fujikura Platinum Speeder shaft that weighs just below 50 grams. Kendall said she averages 230 yards off the tee.

Her Ping i210 irons start with the 7 and end with the pitching wedge. Kendall said she maintains the same 10-yard gap. Uehara has two other wedges in her bag, a pair of Ping Glides set at 50 and 56 degrees. She uses the Ping Putter Sigma 2 Tyne Black putter, at a 33-inch length.

Uehara is especially good with her hybrids, and plays them as well as longer LPGA players hit their irons. When I asked why, she smiled and said, “They’re easy. I like that they go higher and stop quicker.”

As Kendall and Uehara discussed her club choices and how long she hits them, I told the duo that her average distances were very close to my own. I quickly added that if I ever played Uehara in a straight-up match, she would easily beat me.

They both laughed – and agreed.

You might also face a daunting challenge in matching your game against a golf professional. Nonetheless, minding your gaps and doing something about them will definitely improve your game and your handicap.

Delaware lieutenant governor Bethany Hall-Long is the official starter Oct. 7 for this year’s Clothing Our Kids fundraiser tournament at The Peninsula Golf & Country Club near Millsboro. The past graduate of Indian River High School will join a full slate of golfers for the event, which raises funds for clothing for needy elementary school children throughout Sussex County.