Score posting for handicap indexes in the Cape Region comes mostly to a halt November 14. That is because the Delaware State Golf Association has a seasonal limitation on which scores can be used. 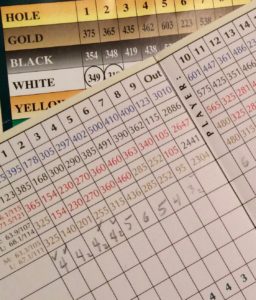 In more southern locales, such as Florida, handicap score posting takes place year-round. If a Cape Region golfer escapes to Tampa for a winter vacation, for example, those Florida scores should be added to the golfer’s Delaware record.

Much bigger changes are coming, however, with the installation of the World Handicap System in the United States beginning next January 1.

A worldwide coalition of golf organizations, including the United States Golf Association and the Royal and Ancient, worked together in recent years to negotiate a common set of handicap principles and rules. Some changes may seem pretty startling to American golfers, but perhaps even more so to golfers from countries that had not previously adopted the USGA handicap system. Several USGA elements continue in the new WHS, in modified form.

For example, a golfer’s current USGA handicap index is calculated by averaging the best 10 of the last 20 scores, multiplied by a factor of 0.96. The new WHS method is a simpler averaging of the player’s best 8 scores of the last 20. This could affect American golfers to a lesser extent than the system currently used in Great Britain, but it will still have an effect.

On the other hand, a version of the current British system, which takes into account bad weather conditions, will now be part of the WHS. Cape Region golfers who suffer through dicey conditions in early April will welcome this change. Playing Conditions Calculations, as it is called, will be based on all scores posted on the same day at each course.

There are several other changes. Posted handicap indexes will adjust after every day’s postings, instead of the current twice per month system. Net double bogey on any hole will be the maximum score for handicap purposes, meaning double bogey plus any handicap strokes applicable to the particular hole. In addition, the maximum handicap index can go up to 54.0. The double bogey limit and handicap maximum modifications could make entering into the handicap system a bit more inviting and expand the universe of golfers who keep a handicap, which was a goal of the rules organizations.

The Delaware State Golf Association is working to schedule information seminars at the beginning of next year to help golfers and clubs’ handicap committees adjust to the new system. The DSGA and USGA already have some preliminary information posted on their respective websites.

More elements of the World Handicap System will also be discussed in future columns.

Online retail is now a major element of the golf industry. It is easy to order clubs, balls, or accessories directly from manufacturer’s websites such as Cleveland Golf or Callaway.

In most cases, however, you pay full retail, the same as pro shops or big box operations like Golf Galaxy. You might also earn free shipping with a large enough order, which makes the websites even more competitive with green grass operations or other walk-in locations.

Shipping discounts offset the cost of travel to a store. Otherwise there is little significant cost benefit to shopping online under that business model.

Other golf businesses take a very different approach, something I first saw about three years ago. The Ben Hogan Golf Company came out of its Chapter 11 bankruptcy reorganization and announced it would limit itself to direct online sales to their customers, but with significantly reduced retail prices. For example, PTx iron sets originally sold through distributors and shops for about $1,400. Under the new business model, these clubs sold for $770 per set.

Hogan is now having a bit of a struggle to keep up with the demand for its products, a very nice problem.

At the 2019 PGA Merchandise Show I spoke with Carissa Olezene, the French company’s sales representative. She told me its range finders are now ranked number one in Amazon rankings for such devices. “We have a small sprinkling of shops that carry our products, and we are happy to expand there, but we are primarily a direct to consumer seller, with no middleman,” Olezene said.

Bushnell is the 800-pound gorilla in the distance-measuring laser rangefinder market, with some models listed at over $300. Tec Tec Tec’s most full-featured model, the ULT-X, is $249.99.

Olezene said the company’s products were “received very well” by the golf pros that came to her booth at the Merchandise Show.

I expect Bushnell to react to the competition for golfers seeking these handy tools as the other companies’ market share begins to increase.

The longstanding trend in consumer electronics is that prices drop continually and sometimes dramatically. There’s no reason to think distance-measuring devices are immune to that dynamic.