Most golf courses are large expanses of turf grass, with their features separated or highlighted by the presence of trees. Most golfers seem to like the combination, at least from an aesthetic standpoint.

When push comes to shove, however, course superintendents and most golfers much prefer short grass to tall trees – and sometimes that requires altering the course landscape.

I met with Rookery South’s Greg Thomas to discuss the tree work and other wintertime projects he and his staffers are doing in preparation for the 2020 golf season.

We first stopped by the small practice putting green west of the clubhouse and just east of the 10th tee box. Thomas pointed to the most obvious signs of change, a collection of about fifteen large tree stumps. Most were maples, with an occasional pine or cedar thrown in.

The now-departed trees formerly separated the practice green from the 10th tee, but an upcoming major expansion of the practice green required them to be cut down. Two large stacks of 8-foot long logs lay near the fencing north of the 18thgreen. 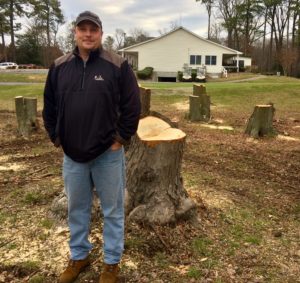 Greg Thomas and his stumps

The next step is to remove all of the stumps, because they cannot be simply ground down when the area becomes part of the new putting surface. After stump removal, fill dirt will raise the greens complex above the surrounding area. Drainage pipes to be set in place will carry the water off to the nearby pond south of the 9th green. The final step is to install the greens mix of sand and topsoil.

The eventual green should be about three to four times the size of the existing practice area. Its final dimension will most likely depend on the cost as well as the conditions they discover during its construction.

“We’ve known for a while that this putting green doesn’t really give players an idea of what the greens are like when they’re playing,” Thomas said. He expects the new design will do a much better job of re-creating what golfers see out on the course. You might see a ridge or two mixed in among softer undulations.

Thomas also noted that the larger green’s location next to the pro shop should also make giving putting lessons a bit easier for the club pros, instead of using the large practice green that sits at the eastern end of the range.

We then drove over to the tee box for the par-5 sixth hole, a dogleg right. A long swathe of trees on the right side separates the hole from the adjacent fifth fairway.

These trees grew out nicely since they were put in place twenty years ago. The problem is that several of their canopies now block the right side of the tee box for the white and blue tee locations.

“I’ve seen players on the blue tees aiming off toward the 12th hole [on the left], just to keep their ball in play,” Thomas said. 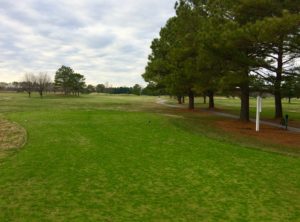 In my own experience from the white tees, there’s no point to using any part of the right half of the tee box. Overhanging branches just a few yards and past the tee box make it impossible to hit from there, unless you like watching your ball ricochet off branches 20 to 30 yards after you hit it.

For the sake of maintaining good turf health and reducing wear and tear on only one side of the tee area, something had to go, and it won’t be the grass.

Three trees stand on the left side of the cart path and are the main source of the difficulty. Thomas plans to limb off as much from them as he can, while still keeping their appearance as nice as possible. That may not be the end result, however, and in my opinion one or more of them might have to come down completely. The remaining trees along the right side of the cart path should continue to promote safe and separate play between the fifth and sixth holes.

Thomas said they are also going to take advantage of the evaporation that occurred after they shut down the golf course’s irrigation system for the winter. “Mother Nature took care of lowering the ponds for us,” he said.

The overgrown vegetation along the now-exposed pond edges could use a big trim with a bladed weed whacker, and that will happen as schedules permit. He also said they plan to re-edge all of the bunkers throughout the course, using straight edge spades for this necessary maintenance job.

Thomas said they will continue to remove dead or dying trees on the property, as they did recently with a large one that sat thirty to forty yards east of the 18th green. “If we have any more of those we’ll deal with it, but most of our tree cutting is done for now,” he said.

The new practice putting green should be a welcome addition to the popular Milton course. The other changes won’t be as noticeable, but should nonetheless help keep the course in good playing condition.