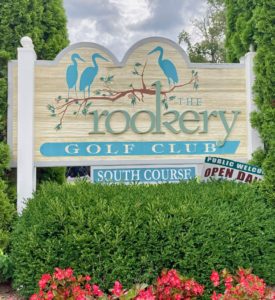 The South Course part of this sign will be coming down as it becomes The Rookery’s only golf course after Dec. 31.

The owners of The Rookery golf courses announced Aug. 28 the closing of their Rookery North golf course effective at the end of 2020.

The letter sent to members and signed by Butch Holtzclaw, Director of Golf, explained that since the takeover of the former Shawnee Country Club nine years ago the North Course had “never operated at a profit,” and the COVID-19 pandemic had hurt them badly.

“At the Rookery we were hit hardest during April and May. During that time the clubhouses were closed and part of that time we had no cart revenue,” Holtzclaw noted.

The owners considered closing the North course during those pandemic restrictions. “We decided that we could not do that because we had a responsibility to our membership to stay open,” the letter noted. Even after the government’s release of many of the restrictions on business activity in reacting to the pandemic, however, the North’s problems continued to the point that the closing decision was reached in August.

Holtzclaw said most of the employees were notified at the same time as the membership, with the management staff learning the news a few days before then. Rookery North head pro Kyle Deas told me he will be the head golf pro at the original Rookery course near Milton after the formal closing of the North course.

Shawnee Country Club opened in 1958 as a full-service private country club with nine holes of golf on the eastern side of the roughly 159-acre parcel. In the early 1980s the club expanded to eighteen holes, using land on the western half of the club’s property. In 2010 and 2011, the club’s financial condition became perilous, and discussions began with The Rookery’s owners about a takeover of the club’s assets. This led to a lease and then the formal sale of the property to The Rookery owners in 2015.

Chris Adkins, The Rookery’s managing director, had been Shawnee’s course superintendent in the early 1980s, and led the acquisition effort. Co-founder Pete Oakley was Shawnee’s golf pro for several years.

As Holtzlclaw noted in his letter, “The Rookery ownership has many ties to the North course.  That is one of the biggest reasons we took it over.  Our hope was with opening times to the public and giving our members another course to play we would see it stay a golf course while generating a reasonable profit. With the growth of Milford we thought things might change but they have not. We are saddened that we will not be able to continue to support the course but it does not make financial sense for our company.”

In an interview this week Holtzclaw said, “I really thought we could make a go of it. We just came up short.”

There have been rumors about the property being sold, but nothing has happened on that front, according to Adkins and Holtzclaw. Simply paying the taxes and doing enough upkeep to maintain property is less costly at this point than continuing to operate it at a loss. That can’t go on forever, so an eventual sale of the parcel is likely.

The South course will remain open and memberships will be offered again for the 2021 season.

Holtzclaw’s letter noted, “To our membership and patrons we appreciate your understanding and past patronage.  Hopefully the pandemic will end soon and all our lives can return to some normalcy.” 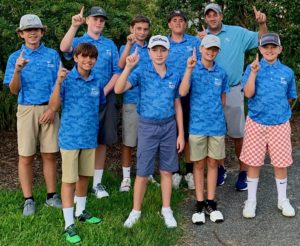 Congratulations to the junior golfers at Baywood Greens who participated in this year’s PGA Jr. League team competitions. The Baywood kids went 6-0 in their contests against teams from Kings Creek CC, Rehoboth Beach CC, and Hooper’s Landing.

The Folds of Honor organization, a 501(c)(3) charity, uses this event to generate millions of dollars for college scholarships for spouses and children of fallen and disabled military service members.

For more information or to make a donation, go to foldsofhonor.org.

The Kings Creek CC Ladies 9- and 18-Hole groups combined for a Beat the Pro team scramble August 27, with 55 golfers participating.