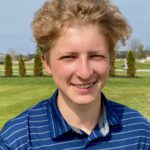 The Cape Henlopen High School golf team had a frustrating day on the back nine at Jonathan’s Landing April 12. The Vikings lost a close match against the Milford Buccaneers, 165-169, despite posting its lowest team score this season.

Cape junior Ethan Mercer’s 37 was his best-ever score in two years of varsity competition. However, Milford’s Tom Hermansader also shot his best-ever round and tied Mercer for medalist honors.

Viking co-captain Tom Burn shot a 7-over par 42, and fellow co-captain Seth Reynolds posted a 45. Senior Flynn Kalb’s 45 completed the team scoring. However, Jared Wright’s 42 and the 43s shot by Jadyn Gregg and Noah Marcelle for Milford made up the four-stroke difference between victory and defeat.

Freshman Jacob Gabbard’s 46 and Dylan Steinwedel’s 47 did not count for Cape. Nonetheless, this was the first match for 2022 that all six Viking scores were lower than 50. That is a hopeful milestone.

Viking head coach Rob Harrod noted the improvement in scoring but saw room for improvement. “They left some better scores out there. Three putts are no good and sometimes there were problems figuring out which club to use. There were also some good signs. I expect we’ll continue to see lower scores.”

The Lydic sisters are taking turns as Sussex Academy continues its unbeaten streak in this year’s golf matches.

Hannah Lydic won medalist honors April 11 with her one-under par 35 at Baywood Greens in a tri-match against Polytech and host Delmarva Christian. The Seahawks defeated the Ravens 153-179 and the Royals 153-198. Academy head coach Doug Grove said conditions were “pretty cold and windy” on Baywood’s back nine.

Sawyer Brockstedt finished second overall with an even par 36. Lydic’s sister Sara, who earned the medalist spots in the Seahawks’ first two matches, finished with a 37. Austin Dostal’s 45 completed the team scoring. Kylie Yiengst scored best for Polytech with her 39. Justin Boyer’s 43 was the Royals’ best total.

Congratulations to Brody Rollins of Milton, Jacob Gabbard of Lewes, Sam Metz of Rehoboth Beach, and Jake Hollerbeck of Millsboro for their recent age-group triumphs on the Maryland Eastern Shore Junior Tour powered by Under Armour.

Last year’s inaugural Ace Cup at Kings Creek Country Club was a great success, both for the twelve outstanding junior girls who participated and for the tournament’s designated charity.

The young golfers raised $70,000 for the Alzheimer’s Association while enjoying close competition in several formats.

Sawyer Brockstedt is the local golfer in the event. To make a donation go to http://act.alz.Org/goto/SawyerBrockstedt.

The smaller scale of the 2022 PGA Show created opportunities for exhibitors whose products may not have garnered as much attention when there were twice as many choices of opportunities to visit.

I chatted with Paul Homersham, one of the English owners of Two Thumb putter grips. He described the company’s origins.

“The inventors had an idea that the best way to putt was to place the two thumbs parallel,” he said. The two-thumb hold on the paddle-style grip reduces wrist break and lessens the potential to twist the club during the stroke, Homersham explained.

The putter line has expanded since Two Thumb’s first efforts. The 2022 options include nineteen designs among five ranges. Grip widths vary from 24 to 43 millimeters, and there are four grip lengths – depending on the model selected, golfers can choose from 10.5, 11, 12.8, and 17 inches.

The 8-sided Octogrip and the Pistol 7E models were this year’s highlights. The Octogrip has no taper, which the company says helps promote even grip pressure across both hands.

The Pistol 7E has no taper across the front but has a pronounced angle enlarging the putter’s dimensions at the grip end and readily visible from the side – hence the term “pistol,” as used by many putter grip makers. The Octogrip comes in 36- and 43-millimeter widths while the Pistol7E’s are narrower, at 26, 29, or 32 millimeters wide.

The grips retail for $30 in the United States and are available at usa.twothumbgrip.com.