In The Rough: The Business Game of Golf 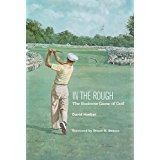 In The Rough: The Business Side of Golf By David Hueber

My own foray into the golf business began in 1997, when I created Hole By Hole, a golf course handicap stroke allocation service.

Golf courses sent me hundreds of scorecards. From their data I would recommend which hole should be set at No. 1 for handicapping, and so on through the full 18 holes. It was fun to do, useful, and appreciated by those who purchased my services.

From my perspective as a budding entrepreneur, entering the business side of golf also required that I join the National Golf Foundation, for critical information and potential contacts.

At the time, the NGF was fully engaged in its Course A Day initiative, as the trade association pushed for more and more golf courses to fill the expected demand from the Boomer generation and beyond.

That mission was fulfilled, for a while anyway—until the recession hit and the real estate bubble popped–and with it the dreams of an ever expanding inventory of golf courses throughout the country.

David Hueber was present at the creation of the Course A Day initiative, in his role as the president and CEO of NGF, and in fact coined the term. The story of how that came about and the results of that effort is just one of the fascinating parts of Hueber’s business autobiography, In The Rough: The Business Game of Golf (TCU Press, $32.50).

Hueber, an Indiana native and the son of a club pro, was keen on a professional golf career from early childhood. His game progressed sufficiently to attend Florida State University and play on the golf team, but that’s where his dreams clashed with the reality of his actual talents.

His passion for the game remained unfazed, however, leading him to eventual employment opportunities that used the business training he received at FSU. He started at the NGF, trying to promote public and private golf courses. This work put him in contact with giants of the industry, including Karsten Solheim and many others.

Hueber’s description of how Ping came to be and how Solheim did things a bit differently than the rest is a great business story by itself.

His initial NGF experiences also lead to meetings with PGA Tour Commissioner Deane Beman. Hueber soon joined the Tour staff and spent a long and successful apprenticeship under Beman’s tutelage. He then returned to the NGF as its president and CEO. That’s when the Course A Day program began, a byproduct of Hueber’s emphasis on better research and involving the entire golf industry in developing a path forward.

The success of that initiative is also a good example of two related aphorisms: (a) Be careful what you wish for; and (b) There are always consequences to what you do, many of which are unintended.

Hueber gives a bluntly honest assessment of what was originally intended, and what happened when others took the Course A Day goal seriously enough to implement it in their own development plans.

No one at NGF was thinking that real estate developers would make golf harder by lengthening the courses. The developers themselves were mostly thinking about adding golf course view lots and boosting profits, not about what stretching a 340 yard par 4 to 440 yards would do to average golfers.

It also appears that no one seriously considered the potential problems with overbuilding, especially for golf courses laid out as a real estate amenity for the surrounding acreage. As the current downturn in the Myrtle Beach area shows, abandoned golf courses wreak havoc on adjacent home values, at a time when aging Boomers are in no mood to take a haircut on their investments.

Hueber’s other business experiences continued his occasionally bitter education in the truth of these same two adages, especially when he joined the Japanese owners of the Ben Hogan Company, and then took the reins as the American face for the Japanese owners of the Pebble Beach Properties. His description of the cultural differences between his Japanese superiors and himself is also a clear-eyed recounting of misunderstandings, misreading the marketplace, and paying an eventual heavy price.

There’s much more to this intriguing look back at a remarkable golf business career, including character studies of Ben Hogan, a Hueber mentor, and several other familiar names in golf. His unsentimental description of Jack Nicklaus’ personality, while acknowledging the Hall of Famer’s accomplishments, also explains the difference between respect and adoration.

Hueber eventually veered off from the golf business world to earn a Ph.D., with his dissertation on golf course sustainability. The formerly enthusiastic promoter of a Course A Day clearly learned his lessons, and his thoughts on golf courses and golf equipment are well worth considering.

This book is a useful and wide-ranging history of the business of golf over the last forty years. I highly recommend it.