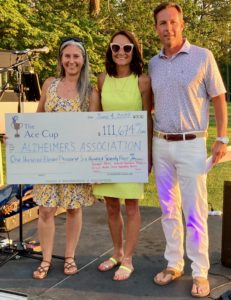 The 2d Annual Ace Cup raised over $111,000 for the Alzheimer’s Association

The Second Annual cup competition took place at Kings Creek CC June 3-4. This time a dozen nationally ranked golfers’ fundraising efforts shot past their second-year $100,000 goal. Chase Brockstedt presented a check to the Alzheimer’s Association for $111,674 at the award ceremony held at the Brockstedt residence.

As he noted, the young women and their families are veterans of the junior golf circuit, juggling travel, competition, schoolwork, and family life. The Ace Cup creates a fun-oriented golf experience while also giving the girls the opportunity to learn about giving back to the community.

Brockstedt also expressed appreciation for the event’s sponsors and supporters, including Titleist, G/FORE, and the Notah Begay III Foundation.

Kristina Fransel is the Executive Director of the Alzheimer’s Association chapter serving Delaware, South Jersey, and southeastern Pennsylvania. She attended the event with Meg DiPanni, the chapter’s vice President for development.

Fransel said the Ace Cup was part of the organization’s nationwide Longest Day fundraiser efforts. She said the Cup players were “one of the top fundraising teams in the country. I think the girls were surprised at how many people have been impacted by dementia issues.”

The chapter operates a 24/7 helpline that provides referrals, access to local resources, and sometimes just a person willing to listen to a caregiver’s story about their situation.

“There’s a lot of misunderstanding, and there’s a stigma attached to dementia that doesn’t happen with other conditions,” Fransel said. “We also help to inform and educate doctors relating to diagnoses, and also support legislation to provide more dementia training where it’s needed.”

As with last year, the girls split up into two groups for the competition.

The event concluded with a convivial party on a beautiful Saturday evening.

For example, six Girls’ Clinics for ages 8-18 are scheduled for Mulligan’s Pointe in June, July, and August.

For more information and to register, go to https://firstteedelaware.org/programs/.

Nate Cecchett posted an 81 in the first round of the 2022 DIAA State Golf Championships at Odessa National Golf Club. The Caesar Rodney High School sophomore fell back with a 90 on the second day, however, with four of the extra strokes coming on a single hole.

On the par-5 sixteenth hole, Cecchett topped his tee shot down into the marshy ravine separating the teeing area from the fairway beyond.

His next attempt disappeared into the forest on the right side of the fairway, about 200 yards from the green. I was marshalling the hole on that side. Neither I nor another helper could find any trace of his ball. We signaled back to the tee box that Cecchett had to take yet another tee shot.

His third attempt also faded right but landed in the rough a few feet from some prairie-high grass. Cecchett’s next shot would be his sixth because of his penalty strokes (He finished 16 with a 9).

As Cecchett trudged up the hill toward us and his ball, I apologized for not being able to find his second shot.

“That’s okay,” he said as he smiled. “Those were my swings.”

That was a great response.