The life span of trees on a golf course

Shawnee Country Club started out in the late 1950s as a 9-hole golf course on land that had previously been a nursery. The rolling acreage was well drained and well- suited for golf, but the course designers understood new trees would be necessary to separate the new fairways from each other.

In the mid-1980s the club built nine more holes on the western half of its 150 acres. Chris Adkins, the superintendent at the time, planted trees next to greens complexes and at other locations on the formerly open land. As he told me some time ago, he felt the trees were needed to help define the fairways and greens, but he also assumed many of them would eventually be thinned out or removed.

That did not happen. The only trees removed from those parts of the course were diseased, hit by lightning, or destroyed in the 1994 ice storm that wiped thousands of trees in southern Delaware. Dozens of trees on that part remain there, including the areas adjacent to the fourth, fifth, seventh, and fifteenth greens.

Adkins is now one of the co-owners of The Rookery courses. He and his staff are tackling tree issues on the North Course not only because they can, but also because that is what is required to maintain a beautiful parkland golf course.

Humans are drawn to the sight of trees and nearby grasses. However, trees easily outcompete grass and will eventually take over any open area if you let them. Since golf is played on grass and not from tree to tree, removing or trimming trees is a vital part of course management.

Rookery North course superintendent Mark Nauman’s dad was a founding member of Shawnee, and Nauman has played the course since childhood. The 1980 Salisbury University business major owned a landscaping company for nearly 20 years, and did renovation work at many golf courses.

Nauman began working at Shawnee shortly before the club entered into its lease/sale arrangement with The Rookery, and became superintendent after The Rookery owners took over the property.

“It’s sort of a dream job to be here,” he said recently.

Nauman drove me around the course to show me the work being done this winter thanks to the new chipper Adkins made available. On the right side of the first fairway, for example, Nauman’s crew was busy cutting limbs from the trees to make it easier to cut the grass underneath and to clear space for golfers who slice into the area.

We then rode over to the sixth green, nestled in a wooded part of the back acreage. Three large trees that once ringed the back of the green on the inside of the paved cart path were taken down. They placed new sod where these trees once stood, with more sod set in the back edge of the green where the trees had damaged it. With these trees gone the 6th greens complex should be healthier, with better access to light and air.

We then stopped by the fifth green where a damaged pine tree had been completely removed. Nauman said they cut down six such trees on the course because they were “sick or dead,” as he put it. There will be more such removals in the coming months.

The second hole has a willow oak and a pin oak just off to the left fairway about 100 yards from the green. Their branches impede approach shots to most of the green. Nauman’s crew is cutting the trees’ lower limbs to open up some of that access without taking away the aesthetic value of the two oaks. 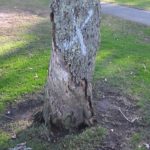 The “X” means this tree will soon be removed.

On the back of the seventeenth green, a small stand of trees hovers over it. Nauman pointed out a disease-ravaged tree with a large “X” painted on it. It won’t be there for long. Another nearby tree has already been cut down, giving the green access to more light in the afternoon.

We also inspected the damage caused by tree roots such as the cracked pavement of the cart path of the 11th hole about 150 yards from the green. These trees aren’t causing any other problems for the course, however, so the best option seems to be to remove the damaged pavement and let that area go back to roots and grass.

“Trees have a life span,” Nauman said. “Some last for 60 years, maples a little less, maybe 50, and pines often don’t last that long.” As he noted, removing and sometimes replacing trees can be a delicate process because of the love people have for them. However, judicious tree removal helps keep the turf in good shape while leaving the remaining stands in better condition.

Nauman and his crew have their work cut out for them, as it were – but the progress they have already made is impressive.