The language of golf often uses metaphors that are at least violent, if not openly war-like.

For example, long drives are “bombed.” Tournament players try to make “the cut.” Golf balls are “struck.” Golfers prone to losing their temper are sometimes said to have “gone nuclear.” 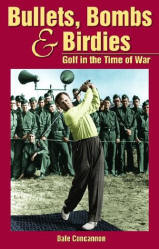 Bullets, Bombs & Birdies: Golf in the Time of War

The sport became a primary contributor to wartime life in several countries, as a welcome relief for both military and civilians, and as a way to tap into patriotic fervor (and wallets, too).

The book’s stories are dominated by the two World Wars, but the opening few chapters outline some of the golf/war connections that cropped up almost contemporaneously with the invention of the sport.

Concannon explains how the sport’s previously limited appeal expanded with the Industrial Revolution and the rise of leisure time, primarily in Great Britain and the United States. During this period there were occasional associations between golf and war. For example, John Ball Jr., the double British Open and Amateur champion in 1890, also distinguished himself in the Boer War ten years later.

By the First World War the interplay between golf and war was much in evidence. Concannon’s research should be illuminating to most readers. For example, one chapter is devoted to the Niblick Brigade, a British Army outfit dominated by former golf professionals and their assistants.

The American contribution to victory in World War I was not limited to its industrial might and the Doughboys. Amateur golfers such as Bobby Jones and leading professionals such as Walter Hagen raised huge sums in Liberty Bonds, with dozens of charity tournaments.

One chapter deals with golf and the Third Reich in the years leading up to World War II, an aspect of the game that was completely news to me. Karl Kenkell was the appointed leader of the Nazi attempts to use the sport for propaganda purposes, and his story was riveting.

The chapters dealing with World War II are also interesting, although they cover far more familiar ground. Concannon presents a fairly complete picture of how golf became part of the civilian war effort. In addition, he describes how military prisoners of war also found ways to play golf while they waited for rescue.

The post-WWII chapters are fairly sparse, although there is a moving segment concerning Billy Casper and his morale-raising tour in Vietnam. A few photographs bring the reader current, concluding with a picture of a Marine hitting golf balls off an aircraft carrier on the way to Iraq.

The book includes several historic photographs and illustrations, including propaganda posters and cartoons.

Pieces of the story of golf and war have appeared in biographies of certain famous players, of course. Nonetheless, I don’t believe anyone has ever before given the issue its own book-length study. For that reason, Concannon has made an important contribution to the history of the game.

Andy Lee and John Purple were co-medalists with a pair of 39s. Brett Hertel said Lee “couldn’t miss a putt.” Purple said his own game started off a little rough, with two shanked shots leading to bogeys. “We played well overall, but I think we can do even better,” Purple said.

Hertel shot a 40 for his round. “I was five over after five holes. Then it turned around. I birdied the 6th hole with a gap wedge shot from 110 yards out that stopped a foot from the hole.”

The squad’s next match should be competitive. They’ll travel to Shawnee CC to play Milford on April 20.