Led by the United States Golf Association and the PGA of America, and supported by Jack Nicklaus and club maker Barney Adams, the initiative sought to convince short-hitting golfers to move up a tee box or two.

The proposers commented that if golfers truly understood how much their game differed from what they saw on TV, they would stop playing a course that was too long for their actual skill level.

One part of the initiative’s marketing program suggested that if PGA TOUR players put themselves through an equivalent distance challenge as “middle-tee” golfers, they would play courses well past 8,000 yards.

The NGF Bulletin noted that among the core golf constituency, Tee It Forward produced mixed results. Most could recall the program’s existence, but only 30% had taken the advice – mostly golfers 50 and older. “Three-quarters say their scores improved, and even more (80%) say they’ve had more fun,” said Joseph Beditz, Ph.D., the NGF’s president and CEO.

So why haven’t more golfers taken the hint?

It’s not as if driver distances have lengthened or handicaps improved over the years. The recent USGA/Royal & Ancient Distance Study showed that average male amateurs are hard-pressed to produce consistent drives over 220 yards.

As Beditz noted, ‘[B]ehavioral changes in consumers and operators require a lot of time, effort and intervention. National advertising helps create needed awareness, but is insufficient to overcome the inertiae of ego, convenience and conformity, which golfers – virtually all of them – willingly admit stand in the way.”

He has a point.

In 2017 the owners of Rookery North installed a new set of gold tees to become the newest and shortest teeing areas for the course. The operators noted how readily women golfers flocked to the new option, which reduced the course length to 4,795 yards down from the red tees, set at 5,333 yards.

Somewhat unexpectedly, the presence of the gold tees convinced many male golfers to move from the white to the red tees. Some even admitted they moved because the red tees were no longer the shortest – proving once again that too much pride is rarely a good thing.

Course operators have tried several methods to convince golfers to use the tees that best match their skills. Making this choice should produce lower scores and more fun, and from an operational standpoint, shorten playing times. 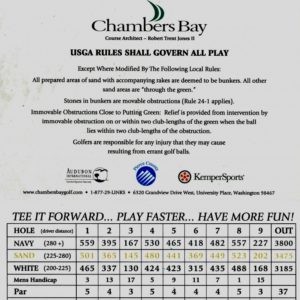 Public golf course Chambers Bay in Washington State was the site of the U.S. Open in 2015. It presents a strong Tee It Forward message on its scorecard. The tee box labels also include guidance based on driver distance. For example, for those whose drives average between 200-225 yards, the course urges golfers to use the white tees, at 6,105 yards.

Some Cape Region courses use quieter forms of influence. Kings Creek CC uses Roman numerals for its tee box designations, avoiding the “White means men, Red means women” notion of years past. At Heritage Shores, the Intermediate tees shown on the scorecard mix eight Forward tees with ten Middle Tee boxes to create a layout of 5,651 yards. There are no par 4s longer than 363 yards and no par 5s longer than 427 yards.

The Rookery near Milton offers a Red/Gold Hybrid setup at 5,129 yards. It seems to be a popular option with many seniors. Young golfers just beginning to learn the game would be well-advised to follow their grandparents’ example.

Course operators could also consider the challenges their course design presents to see if there are other opportunities to shorten the course, make it more enjoyable, and speed up the rounds.

For example, at first glance The Rookery’s Gold Tee dogleg right, 436-yard par 5 sixth hole does not seem to create significant difficulties in the quest for par. However, I often see women and senior men struggle mightily to clear the dogleg corner off the tee. After taking two shots to make the turn, they face the additional and significant task of clearing the pond in front of the green.

I do not suggest cutting down the trees at the dogleg or filling in the pond. However, moving the gold tees up about 60 yards would make it far easier to drive past the corner with the first stroke. That would give short hitters a real chance to reach the green in three strokes.